Introduction
Over the past few years, awareness about the need for coordinated action to limit the ill effects of global warming has increased globally. Most large economies, including India, have committed to net zero carbon emission targets to contribute to this cause. Being the third-largest emitter of carbon dioxide (CO2) globally, India has taken multiple initiatives to lower its carbon footprint and attain net zero emissions by 2070. The government is prioritising the adoption of green hydrogen for this cause, especially to decarbonise sectors such as ammonia, refineries, iron and steel, methanol, and heavy-duty trucking.

India has emerged as one of the global leaders in combating climate change in recent years, and its adoption of green hydrogen is expected to spearhead this movement. During India's 75th Independence Day Celebrations in August 2021, Prime Minister Mr. Narendra Modi announced the National Hydrogen Mission, the country's first major step towards green hydrogen adoption. He laid out the 25-year roadmap for the development of hydrogen in the country and stated his intention to develop India into a global hub for green hydrogen production and export.

What is Green Hydrogen?
Hydrogen, the first member of the periodic table, is the lightest and most abundant element found in the environment. Like electricity, hydrogen is a form of energy that needs to be created from another substance. Water, fossil fuels, or biomass can all be used to produce hydrogen, which can then be separated and used as a fuel or source of energy.

One method of producing hydrogen is electrolysis, where an electrical current is used to separate hydrogen and oxygen in water. If renewable sources (solar, wind, hydro, etc.) are used to produce electricity for this process, the hydrogen generated is considered 'green', as there are no carbon emissions during the entire production process, making green hydrogen one of the cleanest fuels currently available.

At present, the annual global demand for hydrogen stands at 70 million metric tons, 76% of which is produced from natural gas, 23% from coal, and the remaining from the electrolysis of water. The aim is to increase hydrogen production by the electrolysis method and reduce production via the other two methods. Cost parity between green hydrogen and hydrogen derived from natural gas can be achieved by 2030, if not earlier.

Government Initiatives
The government understands that hydrogen production requires a lot of energy, and producing green hydrogen using renewable sources is critical to ensuring the country's sustainable energy security. Additionally, increasing hydrogen production provides an impetus to renewable energy capacity development. This will help reduce reliance on fossil fuels and the need to import crude oil. The government aims to manufacture five million tonnes of green hydrogen by 2030. It has taken various measures to achieve this target: 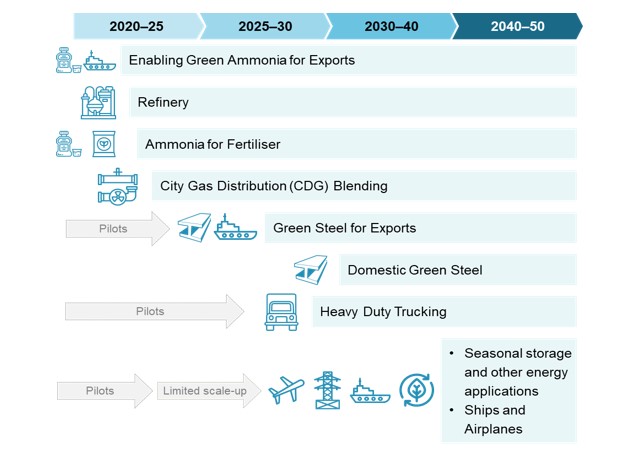 Future Outlook
Due to its advantageous geographic location and the presence of an abundance of natural resources, India has a significant advantage in the production of green hydrogen. India also benefits from low-cost renewable power and rapidly decreasing electrolyser prices. Green hydrogen production can be made cost-effective in India by adding the necessary capacity for renewable power generation, storage and transmission. This will steadily enhance India's self-sufficiency while ensuring energy security.

Carbon emissions are estimated to increase by 1.5 billion tons in 2021; adopting green hydrogen will help reduce these emissions. India can reduce its CO2 emissions by 3.6 gigatonnes between now and 2050 using green hydrogen. The country could use this as a key tool to further its recently unveiled climate ambitions and achieve its 2070 net zero carbon target.

If India's hydrogen adoption plan goes forward as planned, it is estimated that investments of US$ 1 billion can be expected in hydrogen research and development to allow game-changing innovations for the entire world. Green hydrogen can significantly help India combat climate change, supported by proactive collaboration among innovators, entrepreneurs, and the government. It can also help the country export high-value green products, making India one of the first major economies globally to industrialise without 'carbonising'.