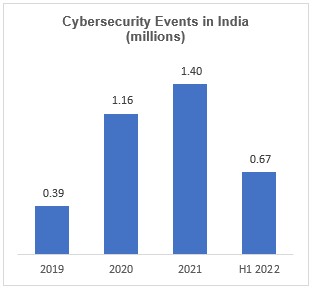 Artificial intelligence (AI), quantum computing, 5G, Internet of Things (IoT), and other quickly evolving and pervasive technologies are providing enormous growth prospects for firms in many industries; the global digital economy's expansion is visible after the Covid-19 pandemic. However, these innovations also increase the attack surface, posing a wide range of cybersecurity dangers, and giving hackers new ways to compromise, abuse, and harm vital IT assets. According to Indian Computer Emergency Response Team, India registered a staggering 3.63 million cybersecurity events from January 2019 to June 2022; the annual bifurcation is shown in the adjacent figure. The datacentre/IT/ITeS sector accounts for the most ransomware attacks in H1 2022, followed by the manufacturing and financial sectors. Ransomware organisations have also targeted vital infrastructure, including oil and gas, transportation, and power. To fight the increasing cyber threat, the Indian cybersecurity ecosystem, comprising government organisations and private companies (including start-ups), is also blooming.

Commercial Cybersecurity Space
The global IoT industry is expected to rise to USD 1,854.76 billion by 2028, creating numerous opportunities for suppliers and businesses wanting to profit from IoT. The cybersecurity sector is expected to have a sizeable portion in the IoT market, considering the rapid expansion of the IT sector and the need for security.

Revenue of the Indian cybersecurity industry is predicted to increase at a CAGR of 30.4% from USD 4.08 billion to USD 15.40 billion during 2018-2023E. The adoption of a cloud-first strategy, business-led innovation, remote working circumstances, an expanding threat landscape and increased threat awareness, domestic and international compliance standards, and data privacy are the main drivers of the Indian cybersecurity industry.

The sector's estimated employee base is expected to expand to around 2.7 times in 2022 as against 2019, which is further expected to scale up significantly in the future, providing good employment opportunities. Reportedly in 2019, the talent pool was sized at 110k and 15k for cybersecurity services and products, respectively, and estimated to be 305k and 37k in 2022.

Due to strict regulations, better awareness levels, more cybersecurity budgets and quicker decision-making processes, developed countries have been booming markets. Major businesses are concentrating on regions such as the US and Europe because there are more cyberattacks on such sites. They also have more outdated technology being upgraded, renovated and revamped. This is primarily causing the US, and Europe's banking, manufacturing, energy, travel and transportation sectors to ramp up spending. With a combined 58% revenue contribution, North America and Europe remain the top two regions for services and product revenue. Regions with the fastest growth rates are Asia and MEA.

Outlook
With the recent digitalisation boom, cybersecurity issues are also rising, especially infrastructure breakdown due to cyberattacks, identity theft and ransomware. To combat these issues, India has a strong and expanding cybersecurity ecosystem within a strong framework set up by the GoI, with private players offering several cybersecurity services and products. The GoI has taken elaborate steps and designated several organisations with responsibilities to ensure national security and other privacy concerns in cybersecurity. The outlook for Indian cybersecurity companies is also bright, as their revenue stream from foreign markets is on the rise.