Television was first introduced in India on September 15, 1959 with the help of UNESCO. Since then the television industry has witnessed transformation with advancement in technology and time. At first, programmes were broadcasted twice a week for an hour a day focus on themes like community health, traffic, road sense citizens’ duties and rights.

The major expansion of broadcasts was when the second television station was set in Bombay in 1972 which was followed by further setting of stations in Srinagar and Amritsar in 1973, and in Calcutta, Madras and Lucknow in 1975.

The television broadcast was in black and white and spread haltingly for first 17 years since its launch in the country. The government decided to form a separate department known as Doordarshan, the national television network, under the Ministry of Information and Broadcasting differentiating it from All India Radio.

The growth of television in India from mid 1970s was mainly based on three trigger points consisting of the Satellite Instructional Television Experiment (SITE), active operation of INSAT-1A and introduction of satellite TV by foreign programmers like CNN followed by Star TV and a little later by some domestic channels like Zee TV and Sun TV into Indian homes.

INSAT-1A was the India’s first domestic communication satellite which became operational in 1982 and led to the networking of all regional stations of Doordarshan. The colour broadcasts were introduced by the government with Asian games coverage, which was hosted by the country in 1982. More than 90 percent of the Indian population received Doordarshan (DDl) programmes through a network of almost 1400 terrestrial transmitters.

The government gradually relaxed restrictions helping the television industry in India to grow and from the mid 1990's, Cable TV brought about a home entertainment revolution. Since then the industry has seen growth becoming the world’s second largest TV market after China. 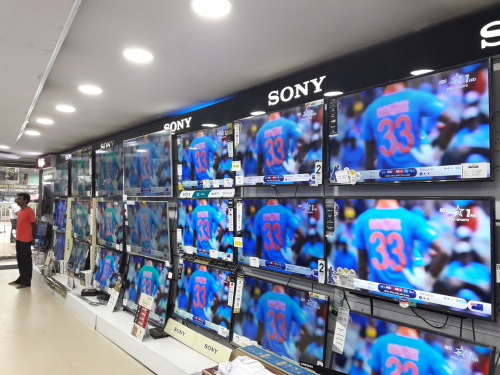 There are 48 pay broadcasters, an estimated 60,000 cable operators, 1606 Multi System Operators (MSOs), five pay DTH operators, in addition to the public service broadcaster- Doordarshan, providing a free-to- air a DTH service. Of the 885 registered TV channels with the Ministry of Information and Broadcasting at the close of financial year 2017-18, 213 are Standard Definition (SD) pay TV channels (including 1 advertisement – free pay channels) and 95 are High Definition (HD) Pay TV channels.

The average time spent by an individual in watching TV per day has gone up by 3 per cent to touch 3 hours 46 minutes, according to the findings. Around 77 per cent of the time spent on the television was on escapism (GEC and film channels). While 53 per cent of total content consumed was on general entertainment, another 24 per cent was on films. News viewership remained at around 7 per cent despite 43 per cent of TV channels in India being classified as news channels. The increase in viewership was led by Oriya, Assamese, Marathi, Bhojpuri and Urdu content. The average viewership in sports was inclined towards Wrestling, which overtook cricket to become the most viewed sport. The viewership share in 2018 was 20 per cent, 19 per cent and 17 per cent of wrestling, cricket and kabaddi, respectively.

TV subscription grew 11 per cent to reach Rs 435 billion (US$ 6.22 billion). According to BARC, 31 per cent of TV viewing households had paid DTH, 13 per cent had free DTH and 44 per cent had digital cable. The idea of multiple TV homes reached to four million households in 2018.

In early 2019, TRAI introduced New Tariff Order (NTO) which allowed viewers to select the channels they wanted to watch and pay the maximum retail price (MRP) set by broadcasters for each channel or for a bouquet of channels. Thus, television broadcaster will now focus on creating consumer database

Indian media and entertainment (M&E) industry is expected to grow at a compounded annual growth rate (CAGR) of 12 per cent to touch US$ 33.6 billion by 2021 from US$ 23.9 billion in 2017. In this, television segment will be the largest player holding 40 per cent of the M&E industry, growing due to the strong performance by regional brands, multiple sporting events and impact properties.