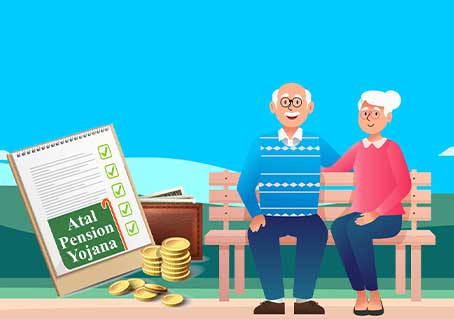 Introduction
In June 2015, the government launched the Atal Pension Yojana (APY) to create a universal social security system by providing/offering guaranteed schemes to all citizens, especially the poor, underprivileged and employees of the unorganised sector. The Pension Fund Regulatory and Development Authority (PFRDA) is in charge of administering the APY.

Through APY, the government offers subscribers a minimum monthly pension—ranging from Rs. 1,000 (US$ 13.61) to Rs. 5,000 (US$ 68.06)—at the age of 60, depending on their contribution (APY subscribers). The scheme also provides guaranteed pension to the subscriber’s spouse, in case of the subscriber's death and return of the cumulative pension wealth to the nominee.

Need for APY
According to a 2014 Dvara Research report, the ratio of retired citizens to working-age citizens in India is expected to increase from 9.5% in 2015 to 28% in 2060. The aging population in the country (aged 65 and above) is expected to expand from 5.4% in 2015 to 16.7% by 2060, while the working-age population (aged 20-64 years) is expected to augment by 3% in the same period. Due to the rising old age dependency ratio, it was important for the government to establish a post-retirement financial programme to secure the well-being of its citizens.

Also, the unorganised or informal sector—that is a key element of the Indian economy—faces numerous challenges such as cyclical unemployment and absence of social security protection. According to ‘Report of the Committee on Unorganised Sector Statistics' by the National Statistical Commission (NSC), published in 2012, ~85% Indian workforce (46 million) is employed in the unorganised sector.

Therefore, to support every citizen with an adequate retirement income in their old age, the Government of India introduced various schemes such as National Pension System (NPS) (in 2008) and NPS-Swavalamban Scheme (NPSS) (in 2010) for citizens working in the unorganised sector to aid and encourage them to save for their retirement.

In June 2015, the government introduced the APY to replace NPSS, wherein the NPSS subscribers (aged 18-40 years) were given the option to migrate to APY. While NPSS was open for all workers in the unorganised sector, the government designed the APY scheme for citizens in the age group of 18-40 years to ensure a minimum guaranteed pension to citizens working in the unorganised sector.

Under this scheme, the subscriber can contribute to payments in the following three modes: monthly, quarterly and half-yearly. To receive a minimum guaranteed benefit of Rs. 1,000 (US$ 13.61), an individual (18 years) must pay a monthly fee of Rs. 42 (US$ 0.57). The monthly contribution chart for the APY subscribers is as follows:

According to the Pension Fund Regulatory and Development Authority (PFRDA), the Atal Pension Yojana offers subscribers a guaranteed rate of 8% assured returns and the possibility of higher earnings, if the return rate is >8% at the time of scheme maturity, after investing in a plan for 20-42 years.

In FY21 (until March 2021), >79 lakh new subscribers joined the Atal Pension Yojana scheme, bringing the total number of people enrolled in the government's social security programme to 3.02 crore. Of the total, ~70% accounts were opened by public sector banks, while the regional rural banks accounted for 19%.

In FY21, PFRDA aided in boosting the number of APY enrolments by initiating programmes such as adding new features in the APY mobile app and ensuring its accessibility in the UMANG app, updating APY FAQs, releasing the APY subscriber information brochure and the APY Citizen Charter—that have been released in 13 regional languages to ensure a greater reach of the APY Scheme and thus, benefit its subscribers and service providers.

Bank contribution to the APY scheme

Top five states contributing to the growth of APY enrolments

In addition, the gender disparity in APY enrolments narrowed with participation of female subscribers, which increased to 44% in March 2021 from 37% in March 2016.

He also stated that this task of supporting the most vulnerable sections of society, under the pension coverage, was only achievable due to the enduring efforts of public & private banks, regional rural banks, payments banks, small finance banks, the Department of Post and assistance provided by the state level bankers' committees. All these collaborative efforts have resulted in boosting the number of subscribers in the pension programme. The number of subscribers in various National Pension System (NPS) schemes (including APY) recorded an increase of 22.8% at 424.40 lakh subscribers in March 2021, from 345.55 lakh subscribers in March 2020, and assets under management stood at Rs. 5,78,025 crore (US$ 78.76 billion) in March 2021, an 38% YoY surge.

Supported by the growing number of enrolments under the APY scheme, PFRDA plans to continue its efforts to promote the scheme and take it to greater heights; thereby, aid India in becoming a pensioned society.