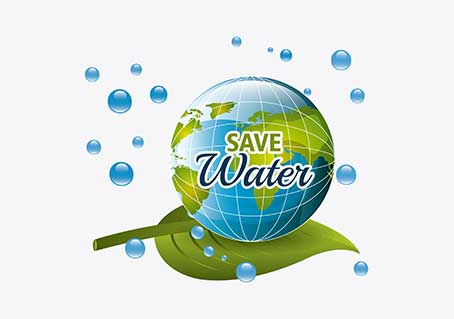 Introduction
India has been facing challenges with respect to sustaining its rapid economic growth while dealing with the global climate change threat. With the economy closely tied to its natural resources and climate- sensitive sectors such as agriculture, water and forestry, India is likely to face major threats because of the projected climatic changes. The government had identified the following impacts of major climate changes on water resources:

To combat this looming crisis, the National Action Plan on Climate Change released by the Prime Minister on June 30, 2008, outlined the principles and identified approaches to combat challenges due to climate change. To this end, the following eight national missions were identified:

National Water Mission
The main objective of the National Water Mission is ‘conservation of water, minimising wastage and ensuring a more equitable distribution both across and within states through integrated water resources development and management’. The five identified goals of the mission are as follows:

The National Water Mission strategies include an integrated plan for sustainable development and efficient management of water resources, with active participation from stakeholders. The mission will identify and evaluate several development scenarios and management practices based on dependable projection of the impact of climate change on water resources backed by reliable data and information. It will also emphasise on integrated water resources planning and convergence between various water resource programmes.

Functioning of the National Water Mission is undertaken at the ministry level and inter-sectoral groups have been constituted, combining resources from other pertinent ministries, industry, academia and civil society, along with a dedicated mission secretariat.

The awards are given in the following nine categories:

The central government’s assistance to states for rural water supply commenced in 1972, with launch of the Accelerated Rural Water Supply Programme. It was renamed as the National Rural Drinking Water Mission (in 2009), which is a centrally sponsored scheme with fund sharing between the centre and the states. Under the National Rural Drinking Water Mission, one of the objectives was to ‘enable all households to have access to and use safe & adequate drinking water within premises to the extent possible’. It was proposed to achieve the goal by 2030, coinciding with the United Nation’s Sustainable Development Goals. The Jal Jeevan Mission was launched in 2019 to provide functional household tap connection to every rural household by 2024. It subsumed the National Rural Drinking Water Missio. The total estimated cost of Jal Jeevan Mission is Rs 3.6 lakh crore (US$ 51.50 billion).

The Union Budget 2021-22 announced Jal Jeevan Mission (Urban) to bring safe water to 2.86 crore households through tap connections. This is in line with the central government’s rural water supply project launched in 2019. Finance Minister Nirmala Sitharaman announced an outlay of Rs. 50,011 crore (US$ 6.65 billion) for this scheme—about 4.5 times the revised budget for 2020-21. Until the launch, only 3.23 crore rural households were reported to have tap water supply out of the total 18.93 crore rural households in the country. As of April 12, 2021, 4.07 crore rural households have been provided tap water connections. Currently, the total number of targeted households is 19.18 crore, of which 7.31 crore rural households have been provided tap water connections under the mission. Further, the mission, in partnership with the Department for Promotion of Industry and Internal Trade (DPIIT), launched an innovation challenge to develop portable water testing devices. Through this exercise, the government wanted to develop an innovative, modular and cost-effective solution that can be used at the village/household level to instantly, easily and accurately test the quality of drinking water. Under the Jal Jeevan Mission, Andaman & Nicobar Islands, Goa and Telangana have achieved the 100% target of providing functional tap water connection to every rural household.

Prime Minister Narendra Modi launched the Jal Shakti Abhiyan: Catch the Rain campaign (with a tagline ‘Catch the rain, where it falls, when it falls’) on World Water Day, which was observed on March 22, 2021. This programme focuses on collecting and conserving rainwater. It will be implemented from March 22, 2021, to November 30, 2021, covering the pre-monsoon and monsoon periods across urban and rural areas in the country.

The government launched the Jal Shakti Abhiyan: Catch the Rain campaign as a Jan Andolan (mass movement) to encourage water conservation at the grassroot level via active participation of people. Rainwater—collected in the 4-5 months of monsoon—is the only source of water for most parts in the country. So, this scheme is aimed to mandate all stakeholders to build rainwater harvesting infrastructure, according to the climatic conditions and subsoil strata in a particular area, to ensure proper storage of rainwater.

Conclusion
To counter the mounting water challenges over the past few decades, the Ministry of Jal Shakti was formed under the Government of India in May 2019 by merging two ministries—the Ministry of Water Resources, River Development & Ganga Rejuvenation and the Ministry of Drinking Water & Sanitation. The ministry has implemented various initiatives and programmes to create awareness among the citizens for water conservation.

Additionally, the National Water Mission and its subsequent schemes such as Jal Jeevan Mission and Jal Shakti Abhiyan are helping the government build resilient systems to ensure water availability even in the most vulnerable regions and provide long-term solutions for sustainable use of water in the country.