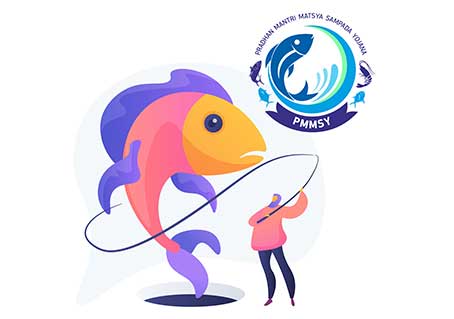 Introduction
The Pradhan Mantri Matsya Sampada Yojana (PMMSY) was launched in September 2020 with an aim to double the income of fish farmers and fishers in the country. It focuses on sustainable development of India’s fisheries sector and is a part of the Atmanirbhar Bharat scheme.

The scheme adopted a “cluster or area-based approach” to create fisheries clusters. The scheme focuses on activities with potential to generate employment such as seaweed and ornamental fish cultivation. It also emphasises on the breeding technique for quality brood, seed & feed and species diversification.

With implementation of the scheme, the government aims to help reduce post-harvest loss from 20–25% to 10%, double the incomes of fishers and fish farmers and generate an additional 55 lakhs direct and indirect employment opportunities.

In line with this, key targets of the Pradhan Mantri Matsya Sampada Yojana are as follows:

Need for PM Matsya Sampada Yojana
Fisheries and aquaculture play an important role in food, nutrition, employment and income in India. The sector employs ~16 million fish farmers and fishers at the primary level and almost twice the number along the value chain. The fisheries sector accounted for 1.24% of the national GVA (gross value added) and 7.28% of agriculture GVA in 2018-19. As per the department of fisheries, marine fishing resources are estimated at 4.41 million tons and its activities extend along 8,118 kms of the country’s coastline. To improve fish production, it was important to conduct integrated fish farming and diversify fish production in areas such as old water, river and brackish water fishery.

To facilitate an enabling environment for comprehensive development of the full potential of the country’s fisheries, the government introduced the ‘Blue Revolution’ for a period of five years (2015-16 to 2019-20). The ‘Blue Revolution’ helped enhance local fish production from 10.26 MMT (million metric tonnes) in FY15 to 13.75 MMT in FY19. Fish productivity increased from 2.3 tonnes per hectare in FY15 to 3.3 tonnes per hectare in FY19.

Further, the fisheries sector has been a major contributor to foreign exchange earnings, with India being one of the world's leading seafood exporters. In FY19, marine products export earnings stood at Rs. 465.89 billion (US$ 6.73 billion), driven by rapid development of the brackish water aquaculture. In FY20, aquaculture products accounted for 70–75% of the country's total fishery exports.

In line with this, recognizing the huge potential in this sector, the Indian government launched PMMSY in September 2020 and allocated funds worth Rs. 20,050 crore (US$ 2.74 billion) for a period of five years (from FY21 to FY25) for overall development of the country’s fisheries.

Implementation Strategy
The PMMSY has the Central Sector and Centrally-sponsored Scheme Components and hence, is being implemented as an umbrella scheme. The scheme is expected to intervene at almost all key components of the fisheries value chain to focus on all-round development of the fisheries sector.

To effectively implement the scheme and get optimal outcome, the implementation is done in collaboration with the states/union territories. While financing of the scheme differs by component and areas, the central government bears the whole cost in some key areas of national importance.

The scheme will also look for suitable linkages and convergence with various centre and state government schemes. A few of the identified schemes for linkages are “Sagarmala Project” of the Ministry of Shipping, PMKSY of the Ministry of Food Processing Industries, MGNREGS and the National Rural Livelihoods Mission of the Department of Rural Development, Rashtriya Krishi Vikas Yojana (RKVY) and other schemes under the Ministry of Agriculture and Farmers Welfare.

Funding Plan
PMMSY will be implemented with the following funding plan:

The PMMSY scheme is anticipated to have impacted ~800,000 employment and beneficiaries across the country.

The government proposed mega investments to strengthen fishing ports and landing centres for healthy fish management and reduction of post-harvest erosion, high cost, etc. The government allocated funds worth ~Rs. 7,700 crore (US$ 1.05 billion) on fisheries infrastructure such as deep-sea vessels and for building an integrated laboratory network for diagnostic and quality testing.

The government is taking significant measures to make the PMMSY scheme a success. In the Union Budget 2021-22, the government allocated funds worth Rs. 1,220.84 crore (US$ 166.97 million) to the Department of Fisheries, an increase of 34% YoY. Of the total allocation, funds worth Rs. 1,000 crore (US$ 136.77 million) was awarded to the PMMSY scheme for FY22, an increase of 43% YoY. This will further contribute to the advancement of fishermen's livelihood in the country.

Under the PMMSY, the government has helped develop a Fish Brood Bank and an Aquatic Disease Referral Laboratory in select states (e.g., Bihar) to boost fish production and quality by ensuring proper availability of high-quality, low-cost fish seed for fish farmers as well as addressing the need for disease detection and water & soil testing.

The government is also focusing on adopting technologies such as the IoT to integrate with the PMMSY to better facilitate development of the fisheries sector as well as its auxiliary industries and help bring fishermen into the mainstream industry—making them economically stable and secure.