The Evolution of Aadhaar Card
Aadhaar, a 12-digit individual identification number issued by The Unique Authority of India (UIDAI), envisions empowering India's people with a digital platform and a unique identity, which can be easily authenticated anytime, anywhere. UIDAI Aadhaar aims to provide transparency, good governance, efficiency and delivery of subsidies, benefits, and services to the residents of India. Launched in 2009, Aadhaar is the largest biometric system in the world. The benefits of Aadhaar have expanded from disbursals of social welfare schemes to enable fair and equal access to financial services like bank accounts, credit, pension, and insurance. Aadhaar is an integral pillar of the union government's financial inclusion plan. As of 21st June, 2021, 99% of India's adult population have Aadhaar cards. 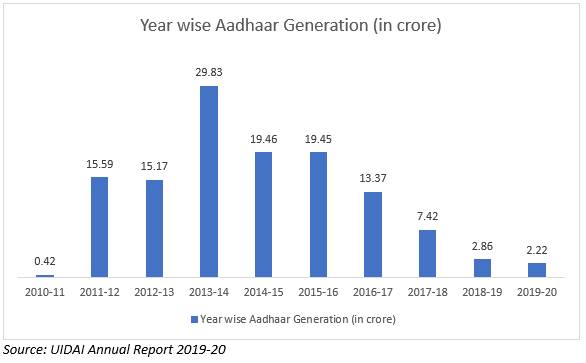 UIDAI Aadhaar card revolutionizing India's identification
Several enthusiasts claim that data can lead to a fourth industrial revolution and the end of theory. Data will uniquely transition the way people think, work, and behave. Besides giving a unique identification to the residents of India, Aadhaar helped the country primarily solve the rising concerns regarding the quality of data. During its initial development phase, experts believed that a unique identification number assigned to the citizens could help capture data accurately. However, Aadhaar outperformed to become a key, connecting databases of bank accounts, cell phones, income tax returns, emails, virtual payment etc. Aadhaar has fostered the development of various interfaces, including the web and mobile applications. Payment interfaces now require Aadhaar verification for private and government services across all domains. In 2009, linking biometric data to mobile phones and SIM cards was utterly unimaginable. Aadhaar card revolutionized the country's identification and promoted authentication.

Benefits of Aadhaar card
Unlike a voter ID card, the Aadhaar card does not have a single purpose, but the card is universally acceptable and can be used for several purposes without specifically registering or applying for a different card for different services. UIDAI Aadhaar card can help the citizens of India to avail government subsidies according to their eligibility. Since the government has a record of the citizen in their directory (which is possible because of the Aadhaar program), the beneficiaries only need to produce their Aadhaar card to avail various services. Other benefits include ease in documentation processes, acquisition of passports, opening bank accounts, access to digital life certificates, direct disbursal of provident funds, etc.

How to work Aadhaar and World Bank
The Unique Authority of India (UIDAI) has partnered with the World Bank and the UN for the deployment of the Aadhaar digital ID architecture outside the country. World Bank aims to augment mobile face biometrics usage. UIDAI is working towards the establishment of an advisory board, which will dedicatedly help to deploy the Aadhaar program across different sectors. The Aadhaar ecosystem also looks to partner with others outside the internal system of the UIDAI. Mr. Subhash Garg, the UIDAI CEO, confirmed that the authority seeks to add enhanced biometric modalities to the existing fingerprint and iris recognition technologies of Aadhaar. Given the cumbersome iris recognition, Mr. Garg looks to deploy facial authentication capabilities on mobile phones. A report released in 2016 claimed that Aadhaar has the potential to save around US$ 11 billion in government expenditures annually. The source claims that the annual savings will be through efficiency gains and reduced leakage.

The UIDAI Aadhaar card has the potential to be replicated in various other countries. According to multiple sources, several countries are looking to either replicate the Aadhaar model for their residents or are noting India's methodology of providing digital access to its people. Giving digital access to almost all platforms is something that many countries worldwide have not achieved.

World Bank and the Aadhaar Card
The partnership between the World Bank and India is around 75 years old. Over the course of this remarkable journey, the World Bank projects in India have strengthened the country's social architecture. The partnership between the UIDAI and the World Bank is one of its kind. The world bank development report of 2016 praised the UIDAI Aadhaar card. The report identifies UIDAI's Aadhaar as a tool for overcoming complex information problems, which helps the government encourage disadvantaged groups' inclusion. Mr. Paul Romer, the then chief economist of the World Bank, said that The Aadhaar card system in India is the most advanced digital ID system.

Further, Mr. Romer believes that the Aadhaar forms the basis of different kinds of connections involving financial transactions. If the Aadhaar system gets widely recognized and adopted, then it will be suitable for other countries of the world. Consultative Group to Assist the Poor (CGAP), In February 2014, called the Aadhaar card an unparalleled unique identification method. Programs like these highlight how smartly public sector investments can accelerate crucial economic development and improve financial inclusion efforts.

The Road Ahead
As of December 9, 2021, India’s population is 1,399,247,989. The country accounts for 17.7% of the world population. Almost 1.3 billion people in India are Aadhaar cardholders. Developing a massive biometric identification system for one of the world's fastest growing countries was challenging yet possible. Today, India is leading the digital transformation race by implementing a national identification program linked to biometric data. Countries around the world have chip-embedded smart passports, which helps in storing personal documents and other information. However, very few countries around the globe have implemented ambitious programs like the Aadhaar program. The rapidly increasing claims of the data revolution are getting globalized and capitalized than what they used to be a few years back. The Aadhaar program, which was started as an identity card project for people residing near the border states, has become an integral component of one of the largest countries by population. The evolution of the Aadhaar card indicates that the world needs to reflect on the computational culture without foreshadowing the purpose of computation and its prospective association to taxonomies of public control. The transition of Aadhaar to a multi-purpose tool has made India digitally robust and the partnership with the World Bank is likely to strengthen the relationship between the two counterparts.