Introduction
India is one of the world's largest automobile producers, with approximately 22 million vehicles manufactured during FY22. Globally, the country is the fourth largest producer of passenger and commercial vehicles after China, the US and Japan. Two-wheeler vehicles account for the largest share of the automobile industry, with close to 77% market share as of FY22, driven by the growing middle-class population and a strong demographic dividend. The automobile sector contributes one-third to the manufacturing GDP, and hence, is a key driver of economic growth in the country. A strong engineering talent base with low-cost manufacturing expertise helped India attract global manufacturers and become an export hub. Leading manufacturers such as Maruti Suzuki India and Hyundai have utilised this opportunity to become the country's first and second largest exporter of passenger cars, respectively. India is a major exporter of automobiles worldwide, exporting 24% of total vehicles produced as of FY22. Indian automobile exports comprise two-wheelers, three-wheelers, commercial vehicles and passenger cars. Various initiatives from the government for instance, Make in India, strong connectivity, availability of infrastructure and relations with key trade partners have contributed to an increase in exports over the years.

Export Trend
India exported close to 5.6 million vehicles in FY22, up 36% YoY compared with FY21. The strong export growth is attributed to the lower base in FY21 and manufacturers tapping the export market to enjoy the benefits of a strong dollar. In value terms, vehicle and component exports stood at US$ 23 billion as of FY22, representing 5% of the total merchandise exports. For April-July FY23, the total automobile exports stood at US$ 8.9 billion, up 25% YoY compared with US$ 7.2 billion as of April-July FY22. Strong demand for vehicles owing to the recovery of the economy and alleviation of supply chain-related issues helped increase exports.

Export Trend by Segment
India is a major exporter of vehicles and auto components. Among vehicles, the major export segment includes passenger cars, commercial vehicles, two-wheelers, three-wheelers and quadricycles. According to the industry body Society of Indian Automobile Manufacturers (SIAM), all automobile segments reported growth in exports in FY22. Commercial vehicle exports grew the strongest by 83% YoY at 92,297 units, followed by passenger vehicles (+43% YoY), two-wheelers (+35% YoY), three-wheelers (+27% YoY) and quadricycles (+23% YoY). Two-wheelers accounted for the largest export share at 80% with 4.43 million units, followed by passenger cars with a 10% share with 0.5 million units as of FY22. 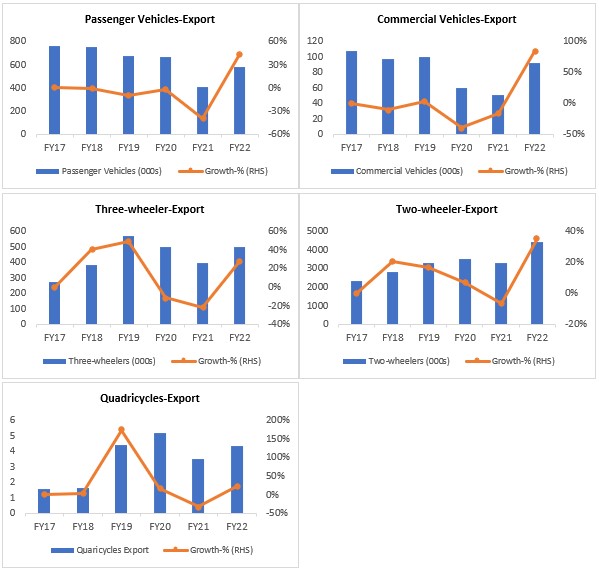 Note- Except Maruti Suzuki, all other companies' exports are as of April-November 2021.

Major Export Destinations
Given India’s strong geographic connections and bilateral relations with key countries across the globe, Indian exports grew considerably in recent years. Major export destinations of Indian automobiles include- the US, South Africa, Mexico, Bangladesh, the UAE, Saudi Arabia, Turkey, Colombia, Brazil, Nigeria, Nepal, Indonesia and the Philippines. According to the Ministry of Commerce and Industry’s statistics, the US is a major export partner with close to US$ 3 billion in exports as of FY22, followed by Mexico (US$ 1.53 billion) and South Africa (US$ 1.21 billion). Two-wheelers account for the biggest share in exports, with key export destinations being Nigeria, Nepal, Colombia, Bangladesh, Austria, Mexico, Kenya, the Philippines and Uganda. 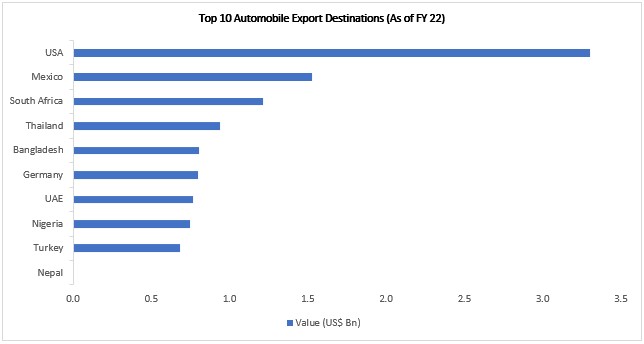 Production Linked Incentive (PLI) Scheme: Approved by the government of India for automobile and auto components industry, the scheme aims to strengthen India's manufacturing capabilities to develop advanced automotive products with a budget outlay of Rs. 25,938 crore (US$ 3.25 billion). The programme aims to provide financial incentives to boost manufacturing and attract investments in the value chain. The programme's primary objectives is to overcome cost disabilities, create economies of scale, build a robust supply chain in advanced automotive technology products and provide employment opportunities. The PLI scheme is expected to garner Rs. 42,500 crore (US$ 5.33 billion) in fresh investments, incremental production of Rs. 2.3 lakh crore (US$ 28.8 billion) and other employment generation of over 7.5 lakhs.

Merchandise Exports for India Scheme (MEIS): Introduced through Foreign Trade Policy (FTP) 2015-20, the MEIS scheme is a major export promotion initiative of the government promoted by the Ministry of Commerce and Industry. The scheme seeks to promote the export of notified goods manufactured in India. Incentives provided under the scheme are calculated as a percentage of the Free on Board (FOB) value of the free foreign exchange or the FOB value of exports per shipping bill in free foreign exchange. Incentives are allotted through an MEIS duty credit scrip. The scrip is transferrable and can be used to pay duties/taxes. Under the MEIS scheme, automobile manufacturers get an incentive of 2% on vehicle exports.

Production Linked Incentive (PLI) Scheme to set up National Programme on Advanced Chemistry Cell (ACC) Battery Storage: This scheme was launched in India with the aim to achieve manufacturing capacity of 50 Giga Watt Hour (GWh). The scheme has an outlay of Rs. 18,100 crore (US$ 2.27 billion) for five years. The primary objective is to promote the manufacturing and export of ACCs in India. Four companies were selected for the programme based on the successful bid received, namely, Rajesh Exports, Hyundai Global Motors Company, Ola Electric Mobility Private Limited and Reliance New Energy Solar.

Outlook
Indian automobile exports strongly recovered in FY22 and crossed the five million unit’s milestone. Several factors can be attributed to this achievement, including 100% FDI in the automotive sector, availability of skilled labour, strong R&D capabilities, availability of raw materials and favourable policy initiatives from the government. The Indian automobile industry enjoys a strong market for its products despite some regions recovering from the after-effects of the pandemic and geopolitical tensions. According to the Government of India’s estimates, India is expected to become the third largest automobile producer in the world by volume after China and the US by 2026. Automobile export volume and value increased at a CAGR of 8% and 7%, respectively, over FY 2017-22 and are expected to continue growing in the future on strong demand. The country is witnessing the adoption of EVs both in passenger vehicles and two-wheeler space. In the long run, EVs are likely to join the export fleets.