Introduction to Horticulture and Organic Farming
India has traditionally been a leader in agriculture production. In the 1960s, it transitioned from an import-dependent economy to one of the world's leading agricultural producers. The country now produces six times more food grains and 6.6 times more horticulture than it did in the 1950s. India recorded the highest ever horticulture production in 2020-21 this was 331 million tonnes. Owing to strong government policies, high GDP development and India's aim to become an export-oriented economy, agricultural production has increased dramatically. India is currently the world's second-largest horticulture producer and fifth-largest country in terms of organic agricultural area. It has also been a strong proponent of sustainable organic farming, receiving significant government backing.

Significance of Horticulture and Organic Farming
The agriculture sector has a significant impact on the economy. It is one of the country's largest employers, employing 42.6% of the population. Over 60% of the total land area is used for agriculture and other related industries, with organic farming accounting for less than 2% of this total. India is also home to the world's largest number of organic farmers. It has 2.3 million acres of certified organic agricultural land. In 2026, the overall organic farming industry is anticipated to reach US$ 10.1 billion. From 2020 to 2021, the total organic exports were worth US$ 1.04 billion. 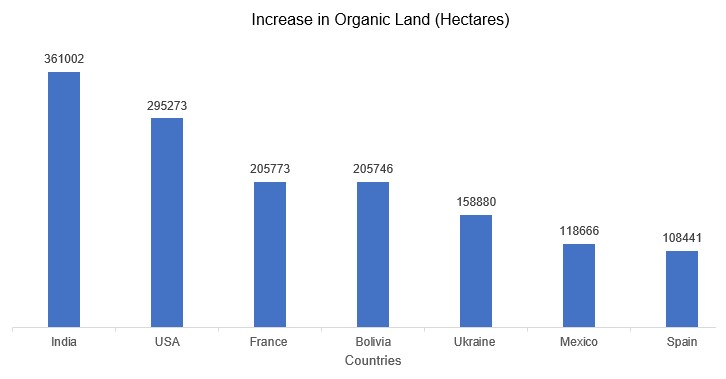 According to Prime Minister Mr  Narendra Modi, Northeast India will create the most impact on organic farming. According to him, the Northeast will emerge as a significant hub for organic farming and the world's capital for organic products with a distinct identity. Farmers in the northeast practise organic farming by default, and more than 75% of the territory is covered by forest. The government has also formulated laws that are comparable with those of Sikkim, which was the country's first organic state.

India is the world's second-largest horticultural producer, producing around 329.86 million tonnes of horticultural output during 2020–21, accounting for 12% of the total worldwide production. Exotic fruits were grown on 8,951 hectares between 2021 and 2022, while indigenous fruits were grown on 7,154 hectares. Horticulture's penetration is steadily rising as such products can be grown on small farms and are relatively easy to cultivate. In India, small and marginal farmers with less than two hectares of land account for 86.2% of all farmers. Factors such as rising income, improved health awareness, higher consumption and urbanisation have led to higher demand for these commodities. In addition, India's diverse climatic conditions have made it possible to produce a variety of fruits and vegetables throughout the year.

Export Potential in Horticulture and Organic Produce
Organic and horticulture exports from India have risen dramatically in recent years. This can be ascribed to increasing government activities as well as India's unique climatic circumstances. From 2010 to 2020, India's horticulture exports climbed from US$ 2.8 million to US$ 3.19 billion. The UAE, the Netherlands and Saudi Arabia have been the top export destinations for these horticulture products. The solid horticulture trend in India has benefited greatly from rising worldwide pricing. A number of government initiatives also aided horticulture exports. To put this in context, India's fresh grape exports jumped from US$ 102.5 million in 2019 to US$ 307.9 million in 2020. Agri-export zones and GrapeNet were instrumental for this growth. In addition, India’s potato exports grew from US$ 0.64 million in 2019-20 to US$ 11.36 million 2020-21. The ongoing Ukraine crisis is expected to raise demand for Indian corn, whose prices has already surged from Rs. 19.50 (US$ 0.25) per kg to Rs. 22 (US$ 0.29) per kg. 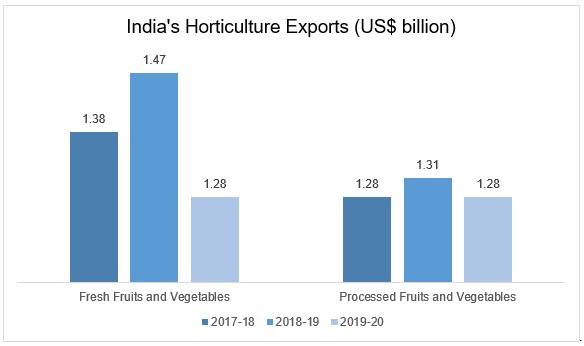 According to data by the commerce ministry, organic product exports surged by 51% during 2020–21. India's exports totalled US$ 1.04 billion, amounting to 888,179.68 million tonnes. India exported organic products to the USA, the European Union, Canada, the UK, Australia, Switzerland, Israel and South Korea, among others. Major states such as Madhya Pradesh, Maharashtra, Gujarat, Kerala and Haryana dominate the country's organic exports. Processed food topped organic exports, accounting for 56% of the total, followed by oilseeds (9%) and cereals and millets (7.30%). Millet exports increased by 23.07% year-on-year, primarily due to government initiatives. The Indian government even declared 2022–23 as the international year of millet.

In the case of organic farming, India had a comparative advantage over other Asian countries in 2019:

Government Initiatives to Boost Exports
The Indian government has launched various initiatives to encourage organic and horticulture exports. These programmes have previously been proven highly effective and are predicted to continue to aid the country. By 2022, India wants to quadruple its exports to US$ 60 billion. Cluster growth is one of the most effective strategies to accomplish this. The government has implemented a number of regulations aimed at promoting these clusters and encouraging farmers to switch to organic farming.

Road Ahead
India's rapid urbanisation and growth have been a major contributor to the organic and horticulture sector's growth in the past. India's unique demography, along with the government's focus on agriculture, will enable the country to make significant strides in horticulture and organic farming. In future, Indian farmers are expected to utilise cutting edge farming technology, which will be heavily incentivised by the government. This will also be supported by the new aggrotech ecosystem. This notable increase in technological integration, combined with India's distinctive diverse weather pattern, would enable the country to achieve new export milestones and strengthen its global brand.