FDI Reforms in the Defence Sector

Defence Sector Brief Overview
India has one of the strongest military forces in the world. The top three largest market segments of the Indian defence sector are military fixed wing, naval vessels and surface combatants, and missiles and missile defence systems. Military rotorcraft, submarines, artillery, tactical communications, electronic warfare, and military land vehicles are some of the other well-known segments. To protect its 15,000 km-long border, India has focused on enhancing its defence output to rival other countries' military might. India is one of the world's biggest defence spenders with a total outlay of Rs. 5.25 lakh crore (US$ 66 billion), accounting for 13.31% of the total budget and indicating an increase over the budget estimates of 2021-22 by Rs. 46,970 crores (US$ 5.9 billion). Given the government's emphasis on easing restrictions on foreign investment in order to achieve India's goal of an "Atmanirbhar Bharat", the growth trajectory of the Indian defence sector remains strong. 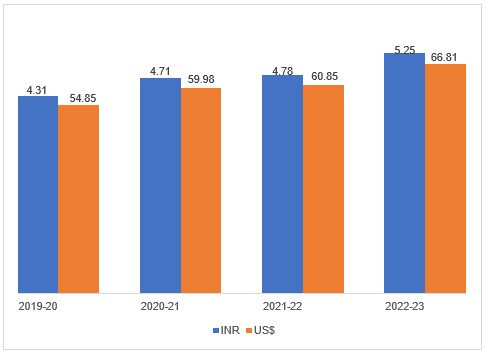 Development of FDI in the defence sector
The crucial change in the Indian defence sector began in 1992 with the implementation of the Defence Procurement Procedure (DPP), which was later amended in 2001 during the Kargil War, following the advice of the Group of Ministers to reform the National Security System. The year 2001 was revolutionary as it marked the opening of 100% participation to domestic players and Foreign Direct Investment (FDI) of up to 26%, both subject to licensing. Ever since, the defence sector has undergone continuous reforms, as has the procurement policy, starting with the creation of the DPP in 2002 and subsequent revisions (the most recent being DPP 2016), Defence Production Policy, issuance of joint venture guidelines and Strategic Partnership in Defence (as part of DPP2016). In 2014, after discussions and reconsiderations, the Department for Promotion of Industry and Internal Trade and the Ministry of Commerce and Industry revised the FDI cap in the defence sector to allow up to 49% through the Government's Foreign Investment Promotion Board (FIPB) route and above 49% through the Cabinet Committee on Security (CCS) on a case to case basis, with provision for up to 100% (foreign ownership for modern technologies). Additionally, from FY 2014-15, FDI inflows of over Rs. 2,133 crore (US$ 268.6 million) have been reported in the defence and aerospace sector. To complement and expand on domestic investment, the Government of India has taken numerous measures to encourage FDI in the defence industry. The exposure and practices associated with FDI in this sector have benefitted domestic companies in multiple forms, such as exposure to state-of-the-art technology, supplementary capital and exposure to global managerial practices, which have collectively boosted employment and led to the acceleration of the sector. Foreign investment in the defence industry gives domestic firms a chance to operate efficiently by expanding their operational footprint with the investment received while helping the Government in achieving its "Make in India" programme.

FDI Defence Sector (Cumulative Figures in US$ from April 2000) 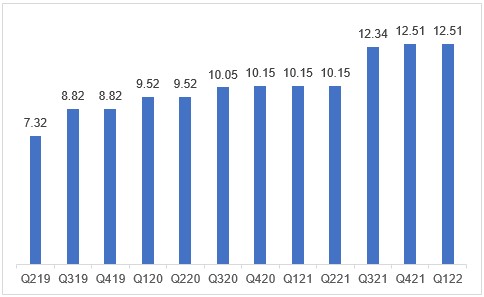 Government’s Role in Supporting FDI in the Defence Sector
In an effort to boost the defence sector and increase the infusion of FDI, the government in September 2020 revised the regulations and permitted FDI under the automatic route up to 74% and 100% through the government route in any area where it is likely to provide access to contemporary technologies. These FDI reforms have profited the sector considerably, as witnessed by the marginal FDI inflow of Rs. 494 crores (US$ 62.2 million) from the announcement until May 2022. In addition to this, the Government's ‘Make in India’ initiative has sparked a number of partnerships between both foreign and local manufacturers. Some of the most significant partnerships in the recent past have been between firms like Hinduja Group, Ashok Leyland, and Elbit Systems for procurement of military vehicles, the partnership between Russia and India for AK-203 assault rifles and Frigates, and Boeing's partnership with Mahindra and HAL involving manufacturing of F/A-18 Super Hornet fighters.

To attract investments, the Department of Defence Production (DDP) has implemented a number of policy reforms:

Additionally, FOEMs are now permitted to share product and Indian offset partner's details after contracts are signed. The ability to modify Indian offset partners and offset components, even in contracts that have already been signed, has made offset requirements more flexible. The offset portal was established in May 2019 to increase the transparency and efficiency of the offset discharge procedure.

The government also unveiled the Strategic Partnership Model in 2017, which calls for the formation of long-term partnerships with Indian entities through an open, competitive process in which they would work with global OEMs to seek technology transfers in order to establish domestic supply chains and set up manufacturing infrastructure.

Road Ahead
The government is aiming to further reduce the proportion of imports of defence and military goods and is planning to increase domestic defence manufacturing. The government has granted 107 licenses for the production of weapons to 358 private companies as part of its effort to encourage 'Make in India' in the defence sector, which totals 584 defence licenses. This can potentially boost the total FDI inflow in the defence sector, of which a great proportion will be potentially allocated to the setting up of manufacturing units, thereby accelerating employment. The change of the FDI limit to 100% will encourage more established foreign companies to share their technology since they can own a controlling stake, thus leading to more FDI opportunities in India.