Introduction
Defence diplomacy refers to the art and process of managing a nation's defence-related operations while advancing relations with other countries. Along with its advancement in science and technology, India's standing as a security partner has improved, and its military stands out as a stabilising force in the area. The significance of defence cooperation in India's overall diplomacy cannot be overstated. Currently, India has defence cooperation agreements with over 53 countries. In light of evolving power dynamics and new challenges, India must consider utilising its defence forces and related scientific, technical, business and academic communities to protect its sovereignty, independence and territorial integrity. 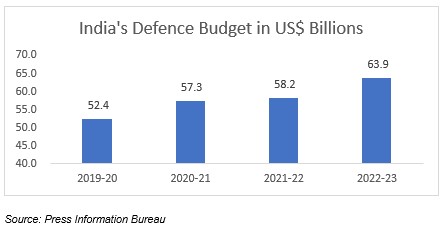 India ranks third in the world in terms of military spending, with defence spending making up more than 2% of the nation's overall GDP. In the 2022-23 Union Budget, the Ministry of Defence has been allocated Rs. 5.25 lakh crore (US$ 63.9 billion), up 9.82% from last year. The government has placed modernisation and infrastructure growth of the Armed Forces at the forefront of the National Security and Defence Planning process through increased budgetary support.

Although India has defence cooperation agreements with several nations, some of the major defence collaborations with key important countries are as follows:

The US-India defence deals
India was named a major defence partner by the US in 2016. Accordingly, India was granted Strategic Trade Authorisation tier 1 status in 2018, allowing it license-free access to various military and dual-use technologies governed by the Department of Commerce. With the Logistics Exchange Memorandum of Agreement (LEMOA), Communications Compatibility and Security Agreement (COMCASA) and Industrial Security Agreement (ISA) currently in place, the US-Indian defence cooperation continues to grow. The Political-Military Affairs (PM) Bureau encouraged the expansion of total defence trade with India from a negligible level in 2008 to more than US$ 20 billion by 2020. The Basic Exchange and Cooperation Agreement between India and the US is a symbol of the two nations' growing defence and security cooperation as well as their increasing military interoperability. In the last 10 years, India and the US have developed strong defence and security connections, with greater emphasis on the research and manufacture of defence technology.

Major agreements and mechanisms signed between the two countries:

2015 - Framework for the India-US Defence Relationship

2016 - Framework for the India-US Cyber Relationship

2020 - The Basic Exchange and Cooperation Agreement

In a recently concluded meeting between India and the US, also known as the 2 + 2 dialogue, the two countries shared a commitment to sustaining a free, rules-based international order to protect the sovereignty and territorial integrity. In 2022, the US Space Command and the Defensive Space Agency of India plan to begin new defence space interactions. Through training and exercises later this year, the two defence establishments are also strengthening their cyberspace collaboration. This defence collaboration between India and the US is also ensuring information-sharing partnerships across warfighting domains.

India-Russia defence deals
An institutionalised structure exists between India and Russia to manage the whole spectrum of military and technical cooperation concerns. Defence collaboration is a key tenet of the India-Russia strategic partnership, driven by the Programme for Military Technical Cooperation inked between the two nations. In the defence collaboration agreement, both governments express their desire to advance and fortify their military and technical cooperation in the areas of weaponry systems research and development, manufacturing and post-sales support. The bilateral defence collaboration agreement for 2021-31 was signed on December 6, 2021, in Delhi at the first India-Russia 2+2 dialogue summit. Additionally, the two sides have recurring military drills and personnel exchanges. Russia and India have a formal system in place to manage the whole spectrum of military-technical cooperation concerns. The pinnacle of this organisation is the 2000 established India-Russia Inter-Governmental Commission on Military Technical Cooperation (IRIGC-MTC). Bilateral projects currently underway between the two countries include:

In addition, the two nations are working together to design and develop multi-role transport aircraft and fifth-generation fighter aircraft. 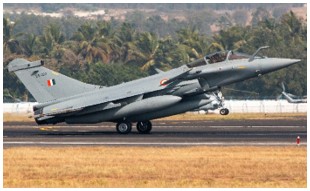 During Israeli Defence Minister Benjamin Gantz's recent visit to India, both nations committed to strengthening their defence cooperation, concentrating on the newest technologies. The India-Israel Vision on Defence Cooperation, signed by Benjamin Gantz and Rajnath Singh, lays out a detailed 10-year strategy for finding new areas of cooperation. The two ministers exchanged a "letter of intent" to strengthen their collaboration on cutting-edge defence technologies. India has used Israeli equipment and technology such as unmanned aerial vehicles, missiles and radar systems for counterterrorism and border security. These tools and platforms have undoubtedly enhanced India's operational and surveillance capacities.

Outlook
Defence collaboration has become a key tool for achieving many crucial foreign policy goals. The Indian government has implemented a number of changes over the last few years to support a strong defence industry ecosystem with dynamism in the domestic design, development and manufacturing of defence equipment. The total capital allocation for the defence services sector rose about 76% over the last nine years. The budget allocated for capital procurement from domestic industry have increased to 68% in 2021-22 from the earmarked 64%.  The Defence Production and Export Promotion Policy 2020, released by the Ministry of Defence, called for a turnover of Rs. 1,75,000 crore (US$ 144.0 billion) by 2025, including export of Rs. 35,000 crore (US$ 4.3 billion) in aerospace and defence goods and services. To support investment in the sector, the government has also increased the maximum FDI authorised under the automatic route up to 74% through the government route to 100%. Following Prime Minister Narendra Modi's vision for 'development and pro-people reforms', India's defence industry is headed for better days.