The world is going through an unprecedented crisis with COVID-19. Scientists are working aggressively to find vaccine for the disease. In the meantime, the solution is to contain spread of the disease. People are required to maintain social distancing, take necessary precautions like wear face mask, face shields, gloves, and keep one-self healthy.

It is believed that nutritious diet and an optimally functioning immune system lowers chances of contracting the disease. The altered immune system is sometimes because of various micronutrient deficiencies, for example, deficiencies of zinc, selenium, iron, copper, folic acid, and vitamins A, B6, C, and E. A strong immune system protects individuals from infections and can neutralize and eliminate pathogenic micro-organisms such as bacteria, viruses, and any other kind of toxic products. Modulation of immune response could provide a substitute for anti-viral/anti-microbial drugs.

Hence, it is not surprising that the focus has shifted back on staying fit and healthy, and the idea of building immunity to avoid catching an infection is trending not only among people but companies are also capitalising on this trend. In the last few months, demand for immunity boosting products such as chyawanprash and honey has increased. Based on the traditional knowledge, herbs are known to possess immune-modulatory properties, which mean they produce both specific and non-specific immune responses. The demand has increased for products having cinnamon, ginger, black pepper, aswagandha, giloe, mulethi, tulsi, green tea, or mixture of all.

Companies like Dabur, Patanjali, Hamdard, Mother Dairy, ITC, and Amul have been promoting wellness products through their advertisements. Television and digital platforms are dominated by advertisements of tulsi drops, fortified haldi milk, chyawanprash, and various immunity-boosting energy drinks as per the self-care guidelines and recommendations issued by Ministry of AYUSH.

Companies have also launched various marketing campaigns to spread the message of a stronger immune system and awareness around Unani medicine products such as joshina, joshanda, imyoton, infunza, and chyawanprash.

In April 2020, Dabur India Ltd. expanded its healthcare over the counter (OTC) portfolio by launching 'Dabur Tulsi Drops', a 100 per cent Ayurvedic natural immunity booster that helps in building respiratory health and provides effective protection from cough and cold. Tulsi Drops have antioxidant, antimicrobial, and adaptogenic properties for stress management.

Dabur reported a 400 per cent increase in demand for its flagship product Dabur Chyawanprash, and witnessed an 80 per cent surge in demand for Dabur Honey. It plans to introduce more products to strengthen its immunity-boosting portfolio.

In May 2020, ITC, the FMCG giant, entered in partnership with direct selling company, Amway India, to launch a range of products in the segment, the first being a one-of-its-kind immunity offering in fruit beverages. The company launched its new B Natural + range of fruit juices with clinically proven immunity boosters in it. This will be sold by Amway's micro-entrepreneurs for a limited time before ITC starts using its pan-India distribution network.

Amul, another dairy brand, also launched new immunity-boosting products such as haldi, tulsi, and ginger milk to promote wellness. The company is promoting these products on digital platforms.

Wagh Bakri Tea, a premium tea company, is promoting its green tea and claiming that it helps in boosting immunity.

Not only are big companies coming up with immunity driving products, local companies are also enhancing their portfolio to meet customer demands. 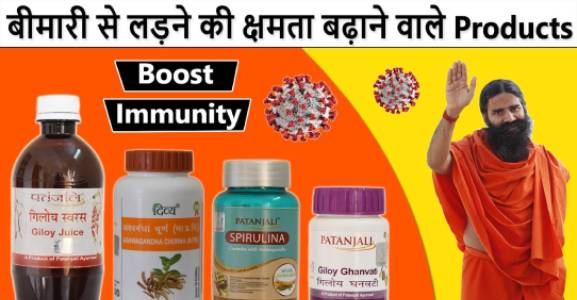 Zikia BioMeds and Pharmaceuticals, a Hyderabad-based company, launched 'OJOPLUS', an upgrade to the Ministry of AYUSH suggested formula. It has additional medicinal active biomolecules as a disease-prevention and supportive drug to supplement immunity and minimize life-threatening complications in the case of viral infections. The product will be available as tablets for adults and syrups for children.

The stores of Balaram Mullick and Radharaman Mullick franchise in West Bengal launched 'Immunity Sandesh' infused with herbs and spices. Sandesh is said to have around 14 ayurvedic ingredients and does not have any sugar or added colour. But the company isn't claiming to cure or prevent one from being infected by the virus.

Dairy Day Plus, a Karnataka based dairy brand, launched two new flavours of ice cream to boost immunity. One is Haldi Ice Cream, which is loaded with turmeric along with pepper and honey, and the second one is Chyawanprash Ice Cream with amla, dates and honey. The company launched a marketing campaign, #health is the new #cool.

All these products are said to be pocket friendly, easily available across rural and urban markets, and most importantly, they boost immunity. Though it is said that immunity cannot be strengthened in a day, a balanced diet consisting of herbs and spices can help when consumed for a long period of time along with exercise and yoga.

Thus, amid COVID-19 pandemic, people in India and across the world are paying special attention to the importance of Ayurveda and yoga.