India is the world’s fastest-growing economy and the sixth-largest country in terms of government spending (US$ 330.52 billion). Government spending and the aim to grow rapidly have helped the country to come up with innovative sources of revenue. India was able to generate Rs. 32,000 crore (US$ 4.30 billion) in revenue through its disinvestment program in FY20 alone. The National Monetization Pipeline was introduced to generate additional revenue from several assets (especially brownfield assets) owned by the government as well as various public sector units (PSUs). The idea behind this asset monetization program was not to sell assets but lease them and realize the underutilized value in them, thus improving efficiency and providing scale. The program aims to monetize 13 core assets in various sectors.

What are brownfield investments?

Brownfield investments are those in which a private company or investor purchases or leases an existing infrastructure project or production facility to carry out new production activity. In the case of the National Monetization Program, the government intends to lease rather than sell brownfield assets. The government’s motto is to monetize these assets, which are either underutilized or not fully monetized, through private participation. To put this in perspective, in 1998, India completed a 756-kilometre Kokan Railway network. In terms of freight usage, which generates the most revenue, this rail network was underutilized. Hence, through the National Monetization Program, the government intends to monetize Rs. 3,600 crore (US$ 485 million).

Asset monetization in the past

Although asset monetization seems like a new concept, India has monetized various assets through methods such as disinvestments and infrastructure securitization in the past. During FY20–21, it was able to raise Rs. 32,845 crore (US$ 4.43 billion) through disinvestments. The country recently experienced one of the biggest privatizations, where Air India was sold at Rs. 18,000 crore (US$ 2.43 billion). This reflects the scale of India’s disinvestment program as well as the capability of PSUs and the new monetization program. 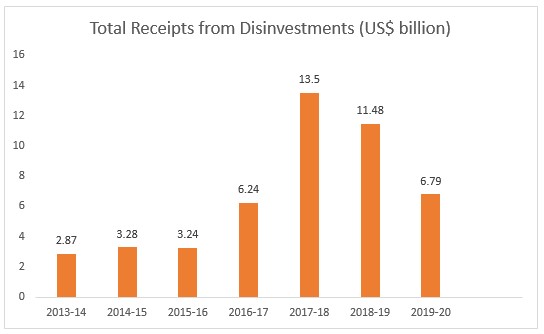 The monetization program helps create new revenue sources for the government. This revenue generation from underutilized public sector units (PSU) owned assets can assist the government to use the additional revenue for more practical purposes. The Indian government has already planned to use this additional set of revenue for the national infrastructure program to help India build state-of-the-art infrastructure in the next five years.

Privatization will increase productivity and efficiency and also has a multiplier effect on the economy. Assets will be used at their maximum production capacity, which will help to create jobs and supply chains. Utilization of these brownfield assets will facilitate economic growth.

The National Monetization Program will provide a window for global institutional investors, such as sovereign wealth funds (SWFs), pension funds (PFs), and insurance funds, to establish their presence in India and invest in infrastructure. Due to the inherent risk in greenfield assets, investors prefer brownfield assets. These large institutional investors collectively manage a wealth of more than US$ 30 trillion.

Finance Minister of India, Ms. Nirmala Sitharaman launched the National Monetization Pipeline (NMP) during the Union Budget of 2021-2022. The government had announced a pipeline of Rs. 6,00,000 crore (US$ 80.56 billion) over the next four years period between FY22-25. The main idea behind this monetization program was to aid the National Infrastructure Pipeline (NIP).

The total estimated value that will be realized under the asset monetization program will account for 5.4% of the total infrastructure investment envisioned under the National Infrastructure Pipeline, which amounts to Rs. 1,11,000 crore (US$ 1.49 trillion). The asset monetization initiative provides the government a big chance to deleverage its balance sheets, allowing it to create additional fiscal room. The government intends to use this fiscal space to fund the National Infrastructure Pipeline (NIP), which will result in increased greenfield investment.

The framework of the asset monetization strategy includes:

The asset monetizing program aims to provide rights to various private investors and monetize on those “rights” rather than selling those assets. The idea was to lease the assets and realize their value.

The program would provide stable and adequate revenue streams for the government and help it de-risk brownfield assets and deleverage the balance sheets.

There will be a structured partnership with well-defined contracts, stringent performance standards, and key performance indicators (KPIs).

The asset monetization scheme is crucial. The government plans to monetize assets in five major sectors, with 13 classes of core assets. The sectors are roadways (27%), railways (25%), power (15%), oil and gas pipelines (8%), and telecom (6%). Railways and roadways contribute 52% to the total value of the national asset monetization plan.

The national monetization plan will include 26,700 km of roadways, railway stations and tracks, 28,608 circuit kilometre (ckt km) power transmission lines, 6 gigawatts (GW) of hydroelectric and solar power assets, 2,86,255 kilometre fiber assets and 14,917 telecom sector towers, 3,930 km of petroleum pipelines, and 8,154 km of natural gas pipelines. There will be more than 20 assets classes from over 12 departments in the country. 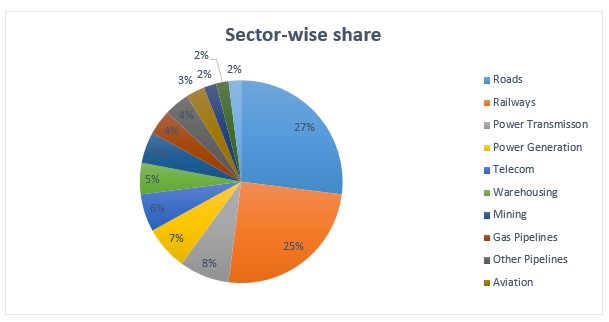 The Indian government have plans to monetize 15% of assets with a value of Rs. 88,000 crore (US$ 11.8 billion) over FY21–22. The chart below shows the actual pipeline phasing based on the capital expenditure (capex) of these assets. 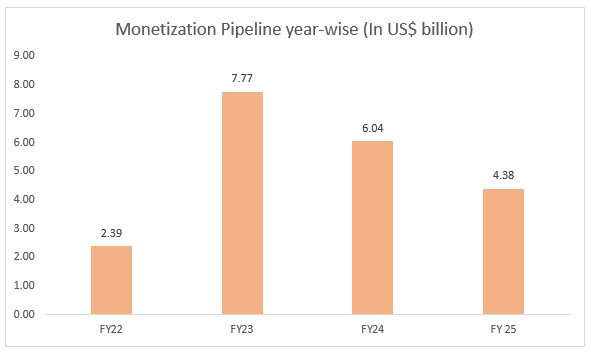 Developments in the asset monetization program

The Indian government has already monetized over 1,400 kilometres (km) of highway projects worth Rs. 17,000 crore (US$ 2.28 billion) and five more assets were monetized through the Power grid Infrastructure Investment Trust, which helped the government raise Rs. 7,700 crore (US$ 1.03 billion). It also plans to monetize 15 railway stations, 25 airports, 160 coal mining projects, 31 projects in 9 major ports, 210 lakh (21 million) metric tons (MT) of warehousing assets, and 2 national stadiums in 2 regional centers. In addition, Rs. 15,000 crore (US$ 2.0 billion) in revenue is expected to come from the redevelopment of various government colonies and hospitality assets, including the hotels of the (Indian Tourism Development Corporation) ITDC.

The asset monetization program is considered to have caused a paradigm shift in the way the government treats brownfield assets. It will significantly improve the utilization of these assets and infrastructure efficiency. Furthermore, the program will generate revenue streams and deleverage the government’s balance sheets. This will trigger credit growth in the economy and help India achieve a new investment cycle. Additionally, the program plans to leverage revenue earned from these monetized assets to establish additional greenfield investments, which will assist India in developing world-class infrastructure and creating more economic opportunities. The National Monetization Program is an ambitious program that is expected to help India achieve its goal of a US$ 5 trillion economy.