A series of structural reforms for the infrastructure sector in India has laid the groundwork for higher economic growth supported by infrastructure development.

Following the pandemic, business dynamics across industries have been transitioned to digital, paving the way for a more promising digital future. Most infrastructure firms are now concentrating on digitising their procedures to enable smooth communication and transparency to build a strong digital infrastructure ecosystem. To augment the same, PM Gati Shakti National Master Plan (NMP) was launched on October 15, 2021 by Prime Minister Mr. Narendra Modi, a unified and comprehensive approach to the overall infrastructure growth of the economy. The goal of the Rs. 100 trillion (US$ 1.25 trillion) project is to improve interconnectivity between roads, rails, airways, and waterways to cut travel time and increase industrial production. Infrastructure developments in the country increase the overall economy's potential rate of GDP growth. This in turn starts an upward spiral of increased investment, economic expansion, and employment generation in the economy. 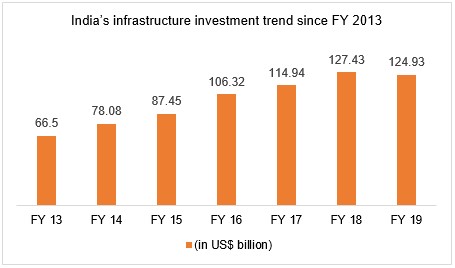 Road ahead
The panorama of infrastructure has never been more dynamic than it is now. Across the nation, world-class infrastructure in the fields of roads, waterways, trains, airports, and ports, among others, are being built due to a substantial shift in the industry. Urbanization and a surge in foreign investment in the sector have also helped its expansion. In order to achieve the vision, mission, and strategic goals of the government by 2025, India will require to develop new infrastructure and upgrade the existing infrastructure.

Future infrastructure is changing as a result of digital and technical disruptions. Technology adoption in infrastructure can be extremely valuable, lowering costs and time overruns, thus helping in improving efficiencies, and helping to make infrastructure more "people-centric,". The overall infrastructure capex is estimated to grow at a CAGR of 11.4% over FY21-26, driven by spending on water supply, transport and urban infrastructure. As previously said, recent government initiatives like GatiShakti, the National Infrastructure Pipeline, and the Asset Monetization Plan pave the way for India to have a robust infrastructure framework in the years to come. Being a developing country, India is poised to fully capitalise on the prospects of the infrastructure sector to expand. Therefore it is legitimate to conclude that India's infrastructure sector has a promising future ahead of it.