India's Tourism Sector on the Rise

Significance of Indian Tourism Sector:
India, one of the oldest civilisations in the world, is a multicultural melting pot. The nation is one of the most well-liked tourist destinations globally, owing to its extensive attractions and rich heritage. From the snow-capped Himalayas in the north to the tropical rain forests in the south, India spans an area of 3,287,263 sq. km. The country’s tourism industry has grown significantly due to its rich culture and diversified ecology. India's tourism sector ranks eighth in Gross Domestic Production (GDP) contribution. The revenue of India’s tourism industry stood at US$ 247.3 billion in 2018, representing a 6.7% increase as compared to the previous year and contributing 9.2% of the entire economy. The sector was also one of the largest foreign exchange earners (FEEs).

Rise of Indian Tourism Sector:
After the COVID-19 pandemic, many reforms were implemented in India to promote tourism; these policies have significantly boosted the sector. Total FTAs in India surged by 406.6% to 2,764,975 from January-July 2022 compared to the previous year. During this period, the US was the top contributor to FTAs in India, at 25.88%, followed by Bangladesh (18.61%), the UK (10.99%) and Australia (5.16%); the US was among the top 15 source nations. In terms of foreign exchange, India's tourism sector earned US$ 6.96 billion in 2020. This is expected to increase further after the pandemic. 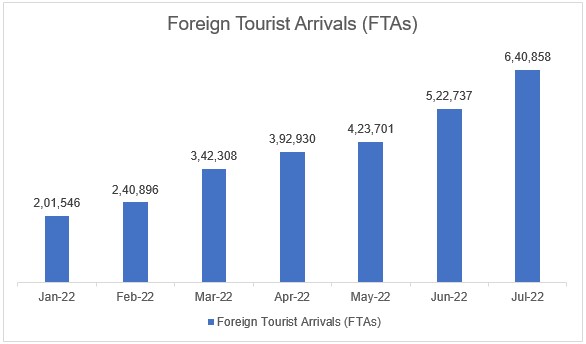 Growth Drivers for Tourism in India:
India has seen a sharp rise in FTAs in recent months. This increase in FTAs could be ascribed to various government policies and India-based factors. A few of the major growth factors are described below.

Government Initiatives
In recent years, the Indian Government has recognised tourism's importance in creating jobs and earning foreign exchange. Accordingly, it has taken various measures to boost domestic and international tourism, which has significantly helped the tourism sector. Some of these measures are described below.

Outlook
The Government of India has taken several infrastructural measures to promote tourism in the country; this trend is likely to continue. According to the FICCI, India's travel market is projected to expand to US$ 125 billion by 2027. The tourism and hospitality industry is among the country's largest job providers. In FY20, the tourism sector provided 79.86 million direct and indirect jobs. This trend is expected to continue and help India generate foreign exchange earnings. Moreover, India is likely to focus heavily on the North Eastern states, tapping into the huge potential of the region’s rich culture and heritage and incredible landscape. In February 2022, the Ministry of Tourism sanctioned 16 new projects in the region worth more than Rs. 1,300 crore (US$ 162.58 million); projects like these are expected to promote tourism and help generate jobs and opportunities in the future.