Introduction
The Indian pharma sector has a long history of developing and delivering world-class products at affordable costs across the globe. India is regarded as the ‘pharmacy of the world’ and ranked third-largest in pharma production by volume and 14th largest by value.  India has the most number of United States Food and Drug Administration (USFDA) approved units (741 as of August 2021). Indian pharma companies offer products in segments such as generic drugs, Over-the-Counter (OTC) medicines, Active Pharmaceutical Ingredients (APIs), vaccines, contract research and manufacturing, and biosimilar and biologics. India is the largest provider of generics globally, accounting for over 20% of the global generic supply by volume and 60% of vaccines. Indian pharma products are exported to over 200 countries; the country meets more than 40% of generic demand in the US and 25% of prescription drugs in the UK.

Overview of Indian Pharma Export
For the period 2021-22, export of drugs and pharma products stood at US$ 24.6 billion compared to US$ 24.44 billion as of 2020-21. The Indian pharma industry witnessed exponential growth of 103% during 2014-22 from US$ 11.6 billion to US$ 24.6 billion. Pharma exports reported strong growth despite the pandemic-led global supply disruptions and geopolitical concerns during the last couple of years.

Value of Indian Pharma Exports (in US$ Billion)
Over the last five years, the value of pharma export has increased at a CAGR of 7% from US$ 17.3 billion in 2018 to US$ 24.6 billion in 2022. Intense price competitiveness and good quality services have helped pharma companies dominate the export market. 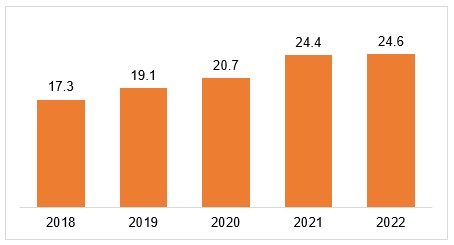 Category-wise Export Trend
Out of the total exports of US$ 24.6 billion, drug formulation and biologicals (drug formulation: different chemical substances such as active ingredients are combined to produce a final medical product; biologicals: pharmaceutical products manufactured from living organisms) accounts for US$ 18 billion of exports. Over the last couple of years, drug formulation and biologicals increased from 74% of exports in 2019 to 78% in 2021, driven by vaccine and drug exports during the pandemic. India has been exporting vaccines and essential generic drugs to around 71 countries during the crisis.

India’s Edge Over Other Markets
Indian pharma companies have always set examples by delivering life supporting medicines at affordable rates across the globe. Emerging markets have been becoming popular in pharma exports compared to developed markets over the last few years. According to the Ministry of Commerce and Industry, the current market size of the Indian pharma industry is US$ 50 billion. These pharma companies have an edge over their developed and emerging market peers due to:

*Revenue as of 2021
Source: Company filings

Pharma Exports Poised to Grow in Future
India has made its mark in the global generic market by delivering quality products at scale. Growth in exports has been achieved, primarily due to consistent innovation over the last 5-6 decades. The share of pharma and drugs in India’s global exports was 5.92% as of 2022. India also has the potential to become a net API exporter with government support, as private players can establish API plants and export them to nations dependent on imports. According to the Indian Economic Survey 2020-21, the pharma industry is expected to reach US$ 64 billion in value by 2024 and US$ 130 billion by 2030. The next leg of growth in pharma, both domestic and exports, will come from advancement in skill development, use of technology in manufacturing and establishment of a solid supply chain.