The Indian Government announced the mid-term review of Foreign Trade Policy 2015-20 on December 5, 2017. Overall, the policy is expected to make Indian exports more competitive and thus give them a boost. By diversifying the export basket, it will try and explore new markets and products, besides increasing India's share in its existing traditional domains. Further, the export of agricultural products will also be encouraged for increasing farmers’ incomes.

The mid-term review of FTP is aimed at mid-course correction. It was to be announced on July 1, together with the implementation of the GST regime. But the announcement was postponed to take into account feedback from the export sector regarding GST-related issues.

Importance of foreign trade to Indian economy can be gauged from the fact that it constitutes 45 percent Indian economy, thereby deserving a special focus. The foreign trade policy will continue to provide a stable and sustainable policy environment for foreign trade in merchandise and services and to link rules, procedures and incentives for exports and imports with other initiatives such as ‘Make in India’, ‘Digital India’, ‘Skill India’, ‘Startup India’, Smart City’, `Swachh Bharat’ and ‘Goods and Services Tax’ (GST).

The five-year FTP, which was announced on April 1, 2015, has set a target of India’s goods and services exports touching $900 billion by 2020. It also aims at increasing the country's share of world exports to 3.5 per cent from 2 per cent.

Proactively taking a 360 degree view on the exports front, the Finance Secretary Hasmukh Adhia said, “in view of the GST implementation, the government is working on accelerating the processing of refunds for exporters. Later, the process will be made completely automated, thereby lowering the processing and time required for the refund”. 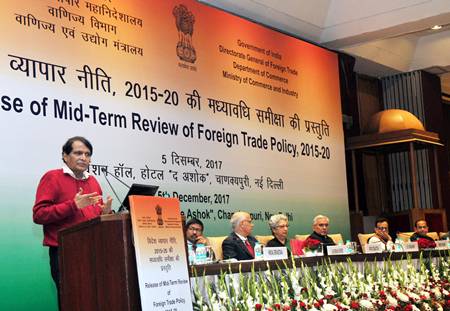 A crucial contemplation in shaping the foreign trade policy has been the need to ensure its alignment with India’s interests in trade negotiations, as well as its obligations and commitments under different WTO agreements. Government has ably addressed constraints including infrastructure bottlenecks, high transaction costs, complex procedures, manufacturing issues and inadequate diversification in services. For instance, the Department of Commerce has set up a new Division to promote integrated and streamlined logistics development in the country. Similarly, for addressing gap in infrastructure sector, the Trade Infrastructure for Exports Scheme has been launched. With the signing of the Trade Facilitation Agreement (TFA) at the WTO, the resulting procedural simplification would also contribute to the lowering of transaction costs.

Now one can clearly see that the Government is doing end to end planning for systematically taking the country’s foreign trade to the next level by properly identifying and addressing each bottleneck. The policy aims at a close monitoring of export performances and will enable taking immediate corrective measures based on state-of-the-art data analysis. It will also increase ease of trading across borders. By promoting exports from labour intensive sectors, it will increase employment opportunities for the youth.

Indian vision is far-fetched and its planning to promote foreign trade is on a solid footing. Recently, the Department of Commerce has step by step mainstreamed State and Union Territory (UT) Governments and various Departments and Ministries of Government of India in the promotion of India’s trade globally, resulting in significant outcomes. Twenty eight State Governments have nominated Export Commissioners. They have also prepared their export strategies focusing on sectors of their strength and adopted suitable policies for promoting exports. A Council for Trade Development and Promotion has been constituted with representation of all States to provide an institutional framework to work with the State Governments for boosting India’s exports. Senior officials have been appointed as designated focal points for exports and imports in several Central Ministries and Departments.

At the same time, an institutional mechanism for continuous import appraisal has been put in place to ensure coordinated and rational import policies in various sectors.