Introduction
In 2018, the Indian government announced plans to develop expressways in the country to improve road connectivity and ensure smooth traffic movement on roads. Through expressways, the government aims to improve connectivity to emerging economic hubs (in cities such as Jaipur, Udaipur, Bhopal and Ujjain) and industrial centres and thereby bring economic prosperity to citizens across the country. The development of expressways is expected to create employment opportunities for citizens in the states such as Gujarat, Madhya Pradesh and Rajasthan.

The government plans to construct 8-lane expressways in India, with plans to further expand into 12 lanes. This will likely ensure seamless high-speed vehicular traffic on roads and reduce travel time between cities.

Need for Expressways
As per TomTom Traffic Index 2020, three Indian cities (Mumbai, Bengaluru and Delhi) featured among the top 10 congested cities in the world. Mumbai ranked #2 with traffic congestion level at 53%, Bengaluru stood at #6 (with 51% congestion level) and Delhi ranked #8 (at 47%).

Surging demand for vehicles in the country is leading to high traffic on roads and subsequently, highlighting the need for improved road connectivity and reduced traffic congestion & pollution. According to the Federation of Automobile Dealers Associations (FADA), vehicle retail sales reached 1,556,777 units in July 2021 over 1,160,721 units in July 2020. Growth in vehicle sales is driven by increased registration of personal vehicles and two wheelers in July 2021. Personal vehicle registrations increased by 62.90% YoY to 261,744 units. Two-wheeler registrations grew 27.56% to 1,132,611 units.

Also, increased industrial activities and growth in various sectors (such as logistics) are contributing to the need for improved connectivity to economic hubs in India.

In 2021, India ranked second in the Agility Emerging Markets Logistics Index. As per CARE Ratings, in 2020, the logistics sector in India was estimated at US$ 215 billion, up from US$ 160 billion in 2017; the growth was backed by rising demand from sectors such as retail, FMCG, consumer goods, e-commerce and manufacturing.

The 1,380-kms Delhi-Mumbai Express Highway is expected to be the world's largest expressway in India. Globally, the second-longest road stretches 1,322 kms in Iceland (the road was completed in 1974).

The estimated cost to construct the Delhi-Mumbai Express Highway is Rs. 98,000 crore (US$ 13.08 billion). The new expressway will pass through six states (Delhi, Haryana, Rajasthan, Madhya Pradesh, Gujarat and Maharashtra) and improve connectivity to India’s emerging economic hubs (e.g., Jaipur, Indore, Ahmedabad, etc.). As of September 2021, contracts for >1,200 kms out of the total 1,380 kms have been awarded and construction of some stretches are under progress. The project is expected to be completed by March 2022 and be operational by 2023. 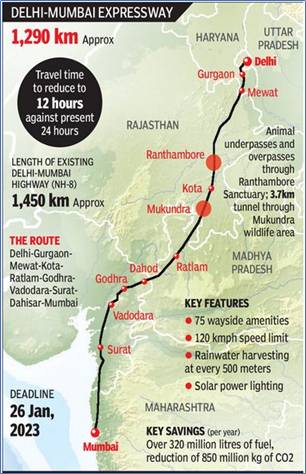 The new expressway is expected reduce the travel distance between Mumbai and Delhi by 130 kms and time to travel from 24-48 hours in 2021 to 12-20 hours (once operational).

The expressway will pass through four states (Haryana, Rajasthan, Gujarat and Madhya Pradesh), apart from the national capital (Delhi) and financial capital (Mumbai). This route will connect the urban centres of Delhi via the Delhi-Faridabad-Sohna section of the corridor, along with route expansion to Jewar Airport and Jawaharlal Nehru Port to Mumbai through a route expansion plan. Route expansion via the expressway is expected to improve transportation between major cities and industrial centres and contribute to the overall economic growth.

The Delhi-Mumbai Express Highway is expected to cross the tribal districts of Madhya Pradesh, Gujarat and Rajasthan. Thus, construction of the expressway would be a development for these tribal districts and create employment opportunities for citizens.

So far, the expressway project is expected to create jobs for thousands of trained civil engineers and generate >50 lakh man-days of work.

Delhi-Mumbai Expressway – Progress So Far
The progress of state-level contracts, estimated cost and length of the expressway allotted/awarded (for construction) are as follows:

The government encouraged use of advanced technologies for faster implementation of the project (Delhi-Mumbai Expressway). Advanced technologies such as digital maps, GPR (ground-penetrating radar), LiDAR (light detection and ranging), equipment telematics, drone-based surveys and intelligent tendering processes have been used in the entire project lifecycle (starting from the detailed project report preparation to construction activities) to expedite completion.

The government completed the land acquisition stage in a short span of <1 year for timely execution of the project (Delhi-Mumbai Expressway). For the Delhi to Vadodara section, 15,000 hectares of land was acquired by parallelly obtaining statuary clearances to save project implementation time.

The Road Ahead…
In September 2021, the government announced plans to build electric highway between Delhi and Jaipur to accelerate the development of expressways. In line with this, the Union Minister for Road Transport and Highways, Mr. Nitin Gadkari, stated that trucks and buses can leverage this e-highway at a speed of 120 kmph. The e-highway is also expected to reduce logistics cost by 70%.

Further, the government plans to build more expressways such as the 594-kms Ganga Expressway—at an estimated cost of Rs. 36,230 crore (U$ 4.84 billion)—to further boost economic activities across the country.

According to Mr. Nitin Gadkari, overall road development in the country is expected to contribute to the growth of annual toll income for the National Highways Authority of India (NHAI). In the next five years (until 2026), the annual toll income for the NHAI is expected to reach Rs. 1.40 lakh crore (US$ 18.69 billion) as opposed to Rs. 40,000 crore (US$ 5.34 billion) in 2021, thus lending a major boost to the overall economy.

Further, India is expected to record more sectoral investments and accelerated industrial activities due to rising government initiatives to develop sectors along with expressways. For example, in September 2021, the Uttar Pradesh government announced an electronics park along the Yamuna Expressway Industrial Development Authority (YEIDA), which is expected to attract an estimated investment of Rs. 50,000 crore (US$ 6.67 billion) and generate employment opportunities.

Supported by such government initiatives, expressways are expected to drive the success of emerging economic hubs across the country and support the India growth story at large.