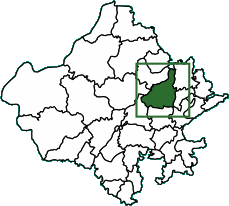 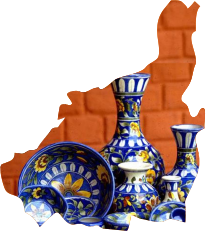 The use of blue glaze on pottery is an imported technique, first developed by Mongol artisans who combined Chinese glazing technology with Persian decorative arts. This technique traveled east to India with early Turkic conquests in the 14th century. During its infancy, it was used to make tiles to decorate mosques, tombs, and palaces in Central Asia. Later, following their conquests and arrival in India, the Mughals began using them in India. Gradually the blue glaze technique grew beyond an architectural accessory to Indian potters. From there, the technique traveled to the plains of Delhi and in the 17th century went to Jaipur.

Other accounts of the craft state that blue pottery came to Jaipur in the early 19th century under the ruler Sawai Ram Singh II(1835 – 1880). The Jaipur king had sent local artisans to Delhi to be trained in the craft. Some specimens of older ceramic work can be seen in the Rambagh Palace, where the fountains are lined with blue tiles. However, by the 1950s, blue pottery had all but vanished from Jaipur, when it was re-introduced through the efforts of the muralist and painter Kripal Singh Shekhawat, with the support of patrons such as Kamladevi Chattopadhaya and Rajmata Gayatri Devi

Jaipur blue pottery, made out of a similar frit material to Egyptian faience, is glazed and low-fired. No clay is used; the 'dough' for the pottery is prepared by mixing quartz stone powder, powdered glass, Multani Mitti (Fuller's Earth), borax, gum, and water. Another source cites Katira Gond powder (a gum), and saaji (soda bicarbonate) as ingredients.

Some of this pottery is semi-transparent and mostly decorated with animal and bird motifs. The range of items is primarily decorative, such as ashtrays, vases, coasters, small bowls, and boxes for trinkets.

The color palette is restricted to blue derived from the cobalt oxide, green from the copper oxide, and white, though other non-conventional colors, such as yellow and brown are sometimes included. 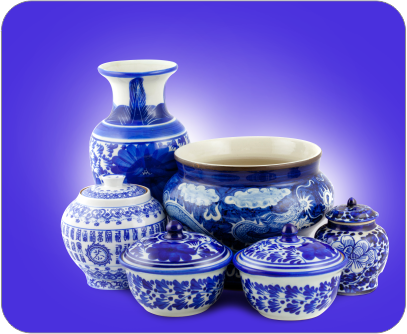 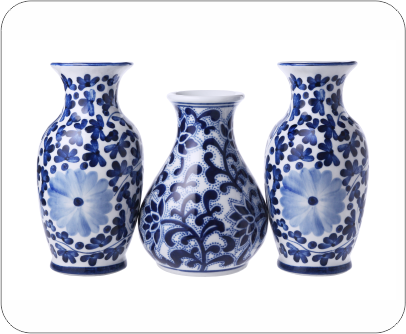 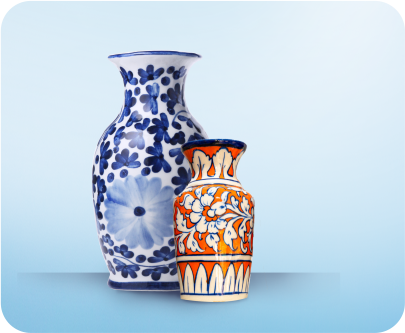 Jantar Mantar is a UNESCO World Heritage Site, Jantar Mantar in Jaipur is considered to be the largest of the five astronomical observatories built by Maharaja Sawai Jai Singh II, the founder of Jaipur.

Built from pink sandstone, the Hawa Mahal is Jaipur’s iconic landmark and visitors can view its complete magnificence from outside, from across the road. However, it is also possible to climb right up to the top for a wonderful view from the windows.

Nahargarh Fort sits proudly on a ridge of the Aravalli Hills, creating an impressive northern backdrop to the city of Jaipur. The palace is a favorite spot for local picnickers. The fort looks brilliant when floodlit at night. Overlooking the city, it presents a glittering view of the city lights.