The industry is expected to generate 5 lakh new employment opportunities and achieve cumulative foreign exchange inflows worth US$ 75 billion and investments of >US$ 1 billion by 2025. 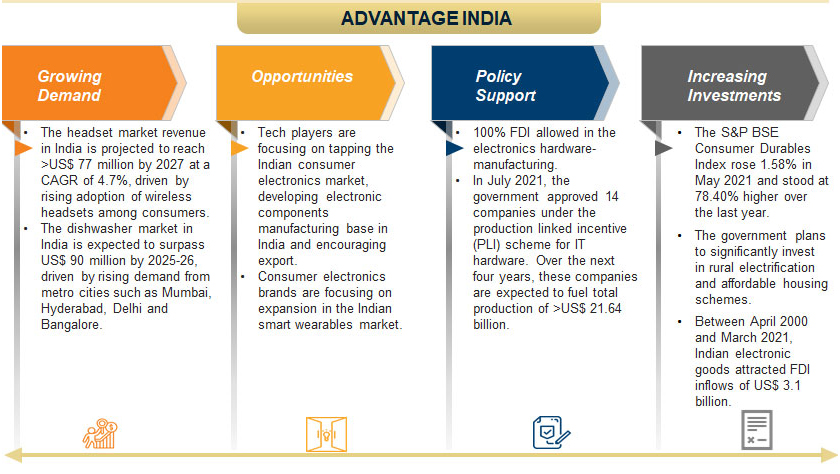 According to Retailers Association of India (RAI), sales of consumer electronics and appliances in the third quarter of FY21 increased by 23.5%, as compared with same period in the last fiscal year. Electronics hardware production in the country increased from Rs. 4.43 trillion (US$ 72.38 billion) in FY19 to Rs. 5.47 trillion (US$ 89.38 billion) in FY20. Demand for electronics hardware in India is expected to reach US$ 400 billion by FY24. The ‘National Policy on Electronics 2019’ is targeting production of one billion mobile handsets valued at US$ 190 billion by 2025, out of which 600 million handsets valued at US$ 100 billion are likely to be exported. In 2020, the Indian government targeted China with new restrictions on colour television and mobile phones. According to a report by Care Ratings, consumer electronics and appliances manufacturers are set to increase their production by 5-8% in FY22, after witnessing a contraction in demand in FY21. According to RedSeer, India's consumer digital economy is projected to reach US$ 800 billion by 2030, from US$ 85-90 billion in CY20, driven by increase in online shopping.

The headset market revenue in India is projected to reach >US$ 77 million by 2027 at a CAGR of 4.7%, driven by rising adoption of wireless headsets among consumers.

The dishwasher market in India is expected to surpass US$ 90 million by 2025-26, driven by rising demand from metro cities such as Mumbai, Hyderabad, Delhi and Bangalore.

In December 2020, DTH services provider Dish TV India Limited partnered with video-on-demand platform Hungama Play to expand its content portfolio. In India, number of individuals having access to TV and number of viewers per week reached 836 million and 762 million, respectively, in 2019.

There is a lot of scope for growth from the rural market with consumption expected to grow in these areas as penetration of brands increases. Demand for durables like refrigerators and consumer electronic goods are likely to witness an increased demand in the coming years, especially in the rural areas as the Government plans to invest significantly in rural electrification.

Growing awareness, easier access, and changing lifestyle have been the key growth drivers for the consumer market. The Government of India's policies and regulatory frameworks, such as relaxation of license rules and approval of 51% Foreign Direct Investment (FDI) in multi-brand and 100% in single-brand retail, are some of the major growth drivers for the consumer market. According to the Department for Promotion of Industry and Internal Trade (DPIIT), between April 2000 and December 2020, FDI inflow in the electronics sector stood at US$ 3.16 billion. Between April 2000 and March 2021, Indian electronic goods attracted FDI inflows of US$ 3.1billion.

In July 2021, the government approved 14 companies under the production linked incentive (PLI) scheme for IT hardware. Over the next four years, these companies are expected to fuel total production of >US$ 21.64 billion.

The PLI scheme, which has been approved for 16 electronics firms, including 10 manufacturers of mobile handsets, would further improve India's role in the global mobile market and complement the goal of making the country a global mobile production hub for manufacturers.

Tech players such as Play (a tech brand) are focusing on tapping the Indian consumer electronics market, developing electronic components manufacturing base in India and encouraging export.