Andaman & Nicobar (A&N) is an important hub for the economic strategic cooperation of India. The role of A&N in India's strong ties with East Asian countries and other sea-related countries is very critical under the Act-East Policy and this is likely to grow. To improve development of projects in the state, the Island Development Agency was created 3 years ago.

Development of a deep internal port draught and proposal to build a trans-shipment port in Great Nicobar at an estimated cost of approximately Rs. 100 billion (US$ 1.36 billion) will enable large ships, along with new employment opportunities, to anchor and increase India's share in maritime trade.

The island's blue economy such as fisheries, aquaculture, and seaweed farming will accelerate in line with the growth of modern infrastructure in A&N.

12 Andaman and Nicobar Islands were chosen for high-impact projects, with focus on improving the region's trade in sea-based, organic and coconut-based products. In September 2020, government think-tank Niti Aayog started the process of hiring consultants to prepare a master plan for the holistic development of the Great Nicobar Islands through the public–private partnership model.

The Indian government has set target for Andaman and Nicobar to attain its energy needs through 100% renewable energy.

The island's blue economy such as fisheries, aquaculture and seaweed farming will accelerate in line with the growth of modern infrastructure in A&N.

In March 2021, the Government of India announced that it would set up four water aerodromes in Andaman & Nicobar Islands to develop the union territory as a tourist destination that can compete with the likes of Maldives and Mauritius.

In March 2021, the Union Ministry of Home Affairs (MHA) announced that it is vetting 41 proposals of projects from various sectors including road construction, hospitality and industries in Andaman & Nicobar Islands and Lakshadweep.

In March 2021, the Environment Ministry recommended a near-negligible eco-sensitive zone (ESZ) around Galathea National Park (GNP) in the Great Nicobar Island in the Andaman and Nicobar Islands region.

In March 2021, the island of Andaman and Nicobar received a 150-tonne cargo vessel named Sindhu from the Cochin Shipyard Ltd. for the movement of supplies and people. The cargo vessel can carry 500 passengers.

In January 2021, state owned power producer NTPC announced that if will deploy 14 electric buses and will also set up public charging infrastructure in the islands. Introduction of electric buses will help cut down tailpipe emissions

NABARD has taken up 14 agricultural projects with a gross refinancing of more than Rs. 1.2 billion (US$ 16.32 million). The bank is also encouraging organised farming on the islands and focusing on the growth of skills.

The islands have been recognised as an eco-friendly tourist destination.

Four tourism-based projects have been initiated in A&N for implementation through the Public-Private Partnership (PPP) model to attract investment and technical & management expertise from the private sector.

In October 2020, Radhanagar Beach in Andaman and Nicobar Islands was among the eight Indian beaches that received the famed Blue Flag ecolabel certification awarded by the Foundation for Environment Education, Denmark. 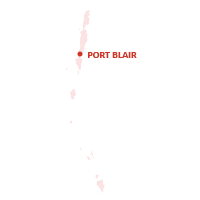