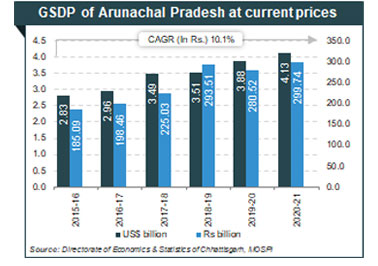 Arunachal Pradesh is the largest among the seven states located in the northeast of India with an area of 83,743 sq kms. The state's economy is largely agrarian, based on the terraced farming of rice and the cultivation of crops such as maize, millet, wheat, pulses, sugarcane, ginger, oilseeds, cereals, potato, and pineapple. The state has considerable mineral reserves that offer huge potential. The state’s hydropower generation potential is estimated at 50,328 Megawatt (MW).

The state’s diverse topography offers ample of opportunities for non-timber-based industries such as bamboo, cane, and medicinal plants. Horticulture has a vast potential, owing to good agro-climatic conditions and topography, for the development of varied varieties of fruits and vegetables.

The resources, policy incentives and climate in the state support investments in mining and mineral products (including cement), tissue culture and floriculture, plantation crops (tea, rubber, etc.) and agro-based industries.

The state’s location provides opportunities for international trade with Asian countries such as Myanmar, Bhutan, and China. Textiles and handicrafts from the state are in demand in neighboring countries.

The Central Government approved North East Industrial Development Scheme 2017 to promote industrialization in the states in the northeast region and to improve productivity in Government departments through computerisation.

Major initiatives taken by the Government to promote Arunachal Pradesh as an investment destination are: