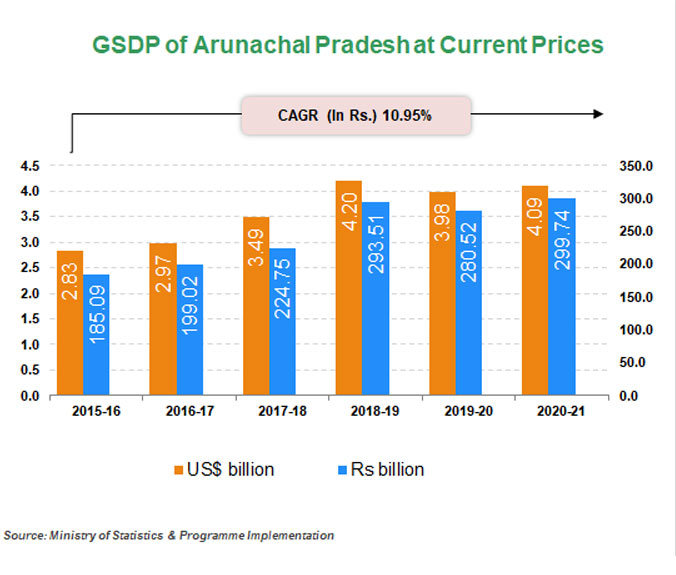 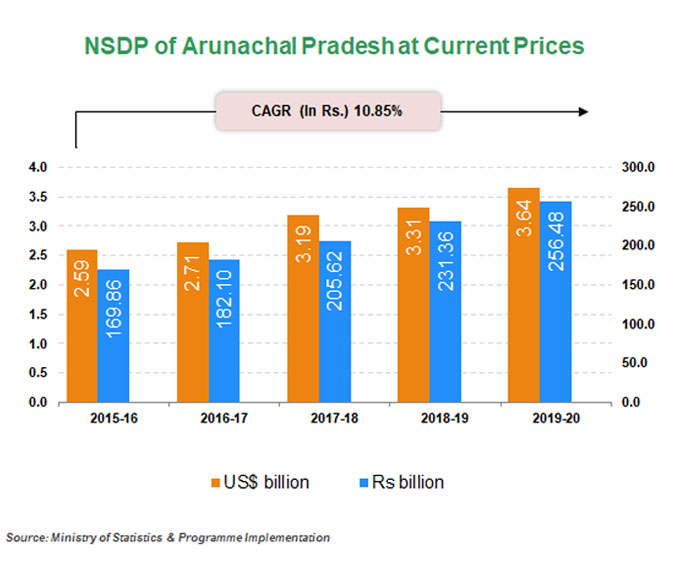 Arunachal Pradesh is the largest among the seven states located in the northeast of India, with an area of 83,743 sq kms. It shares its borders with the neighboring countries of Bhutan in the west, China (Tibet) in the north and northeast, Myanmar in the east and southeast, and the Indian states of Assam and Nagaland in the south. The geographic location of the state provides immense opportunities for international trade with South Asian countries such as Myanmar, Bhutan, and China.

The land is mostly mountainous with the Himalayan ranges. The state is divided into five river valleys - the Kameng, the Subansiri, the Siang, the Lohit, and the Tirap. These river valleys have immense hydropower potential, currently estimated at 50,328 megawatt (MW), or approximately 22% of India's current power generating capacity. As of April 2021, the installed hydropower capacity in the state stood at 765.14 MW.

The state's economy is largely agrarian, based on the terraced farming of rice and the cultivation of crops such as maize, millet, wheat, pulses, sugarcane, ginger, oilseeds, cereals, potato, and pineapple. In 2018-19* total horticulture production reached 190.70 thousand metric tonnes (MT).

Some of the other key industries of the state include art and crafts, weaving, cane and bamboo, horticulture, power, and mineral based industry. Due to its topography, the state has varied agro-climatic conditions suitable for horticulture of flowers, aromatic and medicinal plants. Arunachal Pradesh is home to 601 species of orchids, or 52% of the species of orchids known in India, indicating a huge potential for attracting tourists, especially foreign ones.

The state and central Governments have both offered huge fiscal and policy incentives for the development of thrust sectors in the state. Some of these policies include Public Private Partnership Policy 2011, the State Industrial Policy 2008, and the Hydro Power Policy 2008.