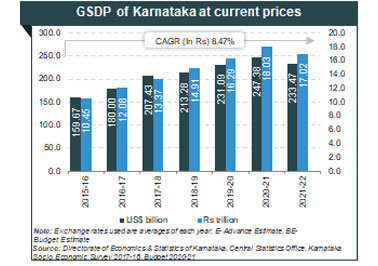 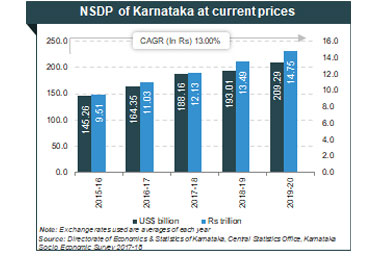 Karnataka is located in the south of India. It is surrounded by the Arabian Sea on the west, Goa on the northwest, Maharashtra on the north, Andhra Pradesh on the east, Tamil Nadu on the southeast, and Kerala on the southwest.

Karnataka has vibrant automobile, agro, aerospace, textile and garment, biotech, and heavy engineering industries. The state has sector specific Special Economic Zone (SEZs) for key industries such as IT, biotechnology, and engineering, food processing and aerospace.

Karnataka is the IT hub of India & home to the fourth largest technology cluster in the world. It has 34 operational SEZs as of October 2020. Karnataka boasts of a diverse flora and fauna and a 320 km natural coastline, which makes it a nature tourist's paradise.

Karnataka offers a Wide range of fiscal and policy incentives for businesses under the Karnataka Industrial Policy, 2020-25 with simplified procedures for investment. Through the ESDM Policy 2017-22, the Government of Karnataka plans to facilitate, promote and develop the ESDM sector in Karnataka and make the state a preferred destination for investment in this sector. In September 2017, the government of Karnataka passed the ‘Karnataka Electric Vehicle and Energy Storage Policy 2017’. In June 2021, the Karnataka government amended the policy to offer more impetus to the electric mobility sector. As per the amendment, a 15% subsidy was announced on capital expenditure on land value (fixed value assets up to a maximum limit of 50 acres land).