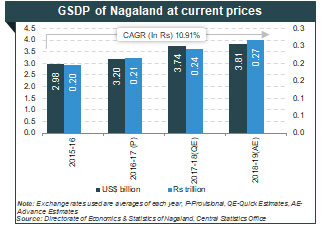 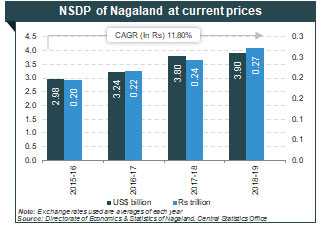 Nagaland is one of the seven northeast states and is located on India’s farthest east side. The state is flanked by Myanmar in the east, Arunachal Pradesh in the north, Assam in the west, and Manipur in the south.

The state has considerable resources of natural minerals, petroleum, and hydropower. It has unexploited reserves of around 600 million metric tonnes (MT) of crude oil and more than 20 MT of hydrocarbon. Moreover, the state has 315 MT of coal reserves and 1,038 MT of limestone reserves.

The agro-climatic conditions in Nagaland provide commercial opportunities for floriculture and horticulture. The state has 650 indigenous species of medicinal and aromatic plants. The state is estimated to have the potential to produce 15,000 MT of honey and 100 MT of wax, which together could generate around US$ 100 million annually. Moreover, the production of honey during 2018-19 was recorded to be 70 metric tonnes.

Bamboo is found extensively in Nagaland, with bamboo growing stock covering nearly five per cent of the total stock in the country. As of 2018, Nagaland had 46 species of bamboo. Production of raw silk in Nagaland stood at around 620 MT in 2018-19 and 558 MT in 2019-20*.

As of March 2020, Nagaland had a total installed power generation capacity of 174.53 megawatt (MW), of which 142.86 MW was under the central sector, 30.67 MW was under state utilities and private sector accounted for 1.00 MW. Of the total installed power generation capacity, 81.03 MW was contributed by thermal, 61.83 MW by hydro and 31.67 MW by renewable energy.

The state offers excellent policy and fiscal incentives for agro-based and forest-based industries, horticulture, food processing, mining, tourism, and the handlooms and handicrafts sectors. Industrial centres and special economic zones (SEZs) are being developed to enhance the marketability of products. As of November 2019, the state had two formally approved SEZs.

According to Department for Promotion of Industry and Internal Trade (DPIIT), FDI (Foreign Direct Investment) inflow in Nagaland** stood at US$ 122 million between April 2000 and September 2019.

Nagaland promotes bamboo processing as an enterprise, covering various applications such as food-based, medicinal usage, handicraft, art, tiles, and flooring. Nagaland Bamboo Development Agency (NBDA) is the nodal office that coordinates with other offices for all bamboo-related research, development, and business applications.

Nagaland has a rich wealth of flora and fauna. Favourable climatic and geographical conditions in the state offer tremendous scope for floriculture.