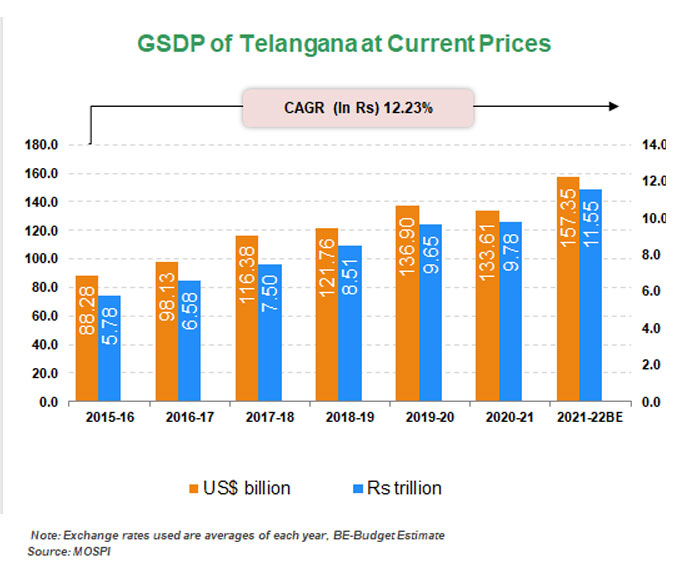 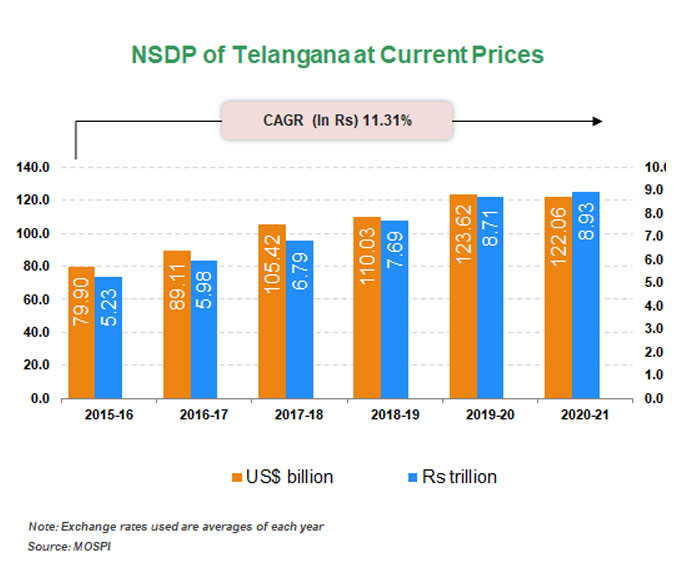 Telangana was formed in June 2014 with Hyderabad as its capital. The state was formed as a result of the split of erstwhile Andhra Pradesh state. The state is land locked by (new) Andhra Pradesh to the south and the east, Maharashtra and Karnataka to the west, and Odisha and Chhattisgarh to the north.

The capital city of Hyderabad is a hub for information technology (IT) and pharmaceutical sectors. Hyderabad was ranked second among the top 20 global cities in JLL’s City Momentum Index (CMI) 2019. IT & ITeS export from Telangana grew at a CAGR of 11.32% from 2013-14 to Rs. 1,45,522 crore (US$ 20.05 billion) in 2021-21. Leading IT companies like Facebook, Google, IBM, and Microsoft hold significant presence in Hyderabad.

Hyderabad is emerging as a hotspot in the data centre space and the city’s inventory is set to grow three times by 2023, with 66 MW capacity addition. Of the 66 MW capacity addition to happen by 2023, about 8 MW capacity is expected to be added in 2021, followed by 29 MW capacity each in 2022 and 2023. While the presence of IT, ITeS, pharmaceuticals and cloud solution companies are acting as a demand driver, the city is witnessing large-ticket investments—Amazon Web Services is investing US$ 2.8 billion in a core data centre facility and National Payments Corporation of India (NPCI) is investing US$ 70 million in an own tier-IV data centre in Hyderabad.

As of October 2020, Telangana had 34 operational SEZs, 56 notified SEZs and 63 formally approved SEZs.

Hyderabad also account for approximately 20% of India's total pharma export. As a pharma and life sciences hub of the world, Hyderabad is poised to grow to a US$ 100 billion business generator by 2030, up from US$ 13 billion (2020), as per projections made in the Life Sciences report of the Telangana government. The state government plans to set up a pharma city and promote public private partnership to develop the state's pharma sector.

The Central Government recently announced formation of an Information Technology Investment Region (ITIR) near Hyderabad. With the establishment of the ITIR, the Government plans to generate 1.5 million direct and 5.3 million indirect jobs in the IT sector in the next five years.

According to Department for Promotion of Industry and Internal Trade (DPIIT), between October 2019 and March 2021, FDI inflow in Telangana stood at US$ 1,835 million.