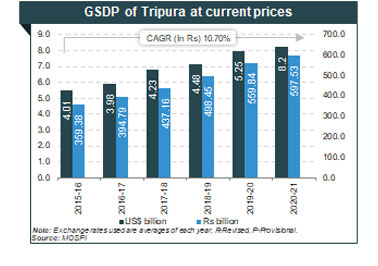 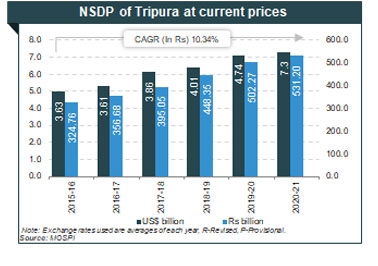 Tripura is one of the seven states in the northeast. Tripura acts as a gateway between Northeast India and Bangladesh. The state shares an 856-km international border with Bangladesh. This offers enormous potential for international trade. Tripura is endowed with rich and diverse bamboo resources and is the largest bamboo producing hub in India. The state has an area of 7,195 hectares to produce bamboo. Tripura holds a strong tea plantation base in India, with 58 tea gardens covering an area of >6,885 hectares, as of February 2020.

Tripura possess huge potential yet relatively unexplored sectors such as organic spices, biofuel, and eco- tourism. It is rich in natural resources such as natural gas, rubber, tea, and medicinal plants. The state is also known for its vibrant food processing, bamboo, and sericulture industries. Tripura is one of the largest natural rubber producers in the country. Production of rubber in the state stood at 74,139 million tonnes (MT) in 2018-19 compared to 46,815 MT in 2014-15

The state is also rich in natural gas deposits, glass sands, limestone, plastic clay, and hard rock. With its pleasant climate and scenic landscape, Tripura is a favoured tourist destination. The state offers tourist attractions such as historical Hindu and Buddhist sites, temples, rivers, and rock carvings. In 2019, the number of foreign tourist arrival in the state was recorded to be 154,405.

Some of the major initiatives taken by the Government to promote Tripura as an investment destination are: