Introduction
In recent years, India's auto component industry has experienced immense growth. The industry can be broadly classified into various organised and unorganised sectors. The organised sector contains high-value precision instruments and services OEMs, while the unorganised sector primarily caters to the aftermarket and consists of low-value goods. The industry has been a major driver of macroeconomic growth and employment. India's auto component industry has contributed 2.3% of the Gross Domestic Production (GDP) and employed around 3 million people directly and indirectly. Rising incomes and a fast-growing economy aided the growth of India's auto component industry. India has also experienced a rise in the demand for automobiles. India has the fourth-largest automobile industry, and the country dominates in the two-wheeler and the three-wheeler segment. This rising demand for automobiles has greatly supported the demand for auto components. 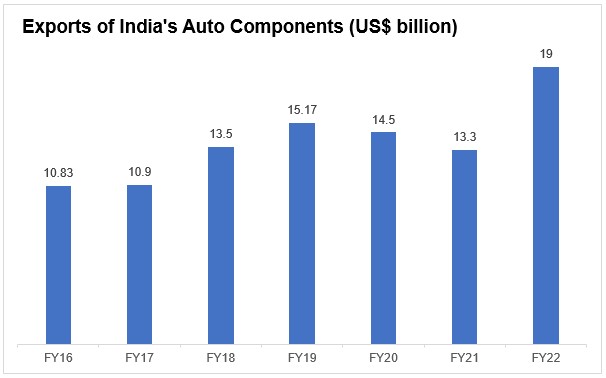 These components include various segments; these segments are:

Conclusion
The rapidly globalising world is opening up new prospects for the transportation business, particularly as the industry shifts toward electric, electronic, and hybrid vehicles, which are more efficient, safe, and dependable. This will increase verticals and possibilities for auto component producers during the next decade. The government of India has already granted several manufacturing incentives to assist businesses in adapting to the sector's changing dynamics. India is also aggressively investing in electric vehicle infrastructure. These investments, alongside rising incomes and growing demand for sustainable transportation, will significantly aid the auto component industry and help achieve new heights in the upcoming years.