Among all the developing nations, India is the only one to have generated electricity using indigenously developed, demonstrated, and deployed nuclear reactors. India ranks third in terms of electricity production worldwide by producing 1207 TWh of electricity. Nuclear energy is the fifth-largest source of electricity for India. India also stands at seventh position in terms of the number of nuclear reactors, with over 23 nuclear reactors in 7 power plants across the country which produces 6780 MW of nuclear power. With an aim to increase its atomic power contribution from 3.2% to 5% by 2031, this surge in the nuclear energy contribution in India will help the country lead towards a more sustainable and economic future. 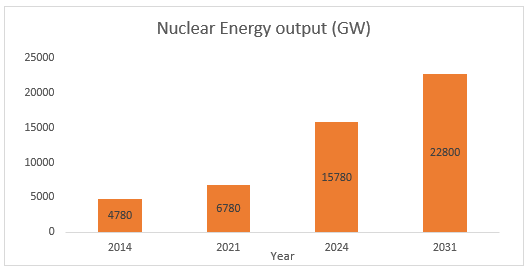 Nuclear power is an efficient way of boiling water to create steam, this steam is used to turn turbines, which creates electricity. Compared to other forms of renewable energy Nuclear energy is considered beneficial, because of its smaller land footprint and the amount of waste it produces. Nuclear energy uses 360 times less amount of land as compared to wind farms and 75 times less land as compared to solar photovoltaic plants. Nuclear fuel is energy-dense as a 1-inch-tall Uranium pallet is equivalent to 120 gallons of oil and about 17,000 cubic feet of natural gas.

Significance of Nuclear power to India

Nuclear energy carries a lot of significance for India. On 3rd December, 2021, Mr. Anil Kakodkar, the former chairman of the Atomic Energy Commission, stated that India can’t meet the net-zero target without nuclear power. He also added that the nuclear power grid alone helps India to provide low-cost power and assist in Grid balancing. In the long run, the country is planning to increase the percentage contribution of nuclear energy to 25% of the total power capacity. The recent Jiatapur project in Maharashtra is projected to bring 21,000 crores (US$ 2.8 billion) in revenues for the government and create 50,000 jobs. Nuclear energy is also considered to be greener as compared to traditional power sources.

The main objective of India’s nuclear energy program was the utilization and development of Atomic energy for peaceful purposes. India wanted to develop a cheap and efficient power source and use nuclear energy for various other research purposes like basic sciences, astronomy, astrophysics, cancer research and education. India’s nuclear program has an ambitious three-stage power production program; this program was meant to be a closed fuel cycle program in which every stage feed into each other. To put this in perspective in the first stage of the nuclear fuel cycle the spent nuclear fuel still contains 96% of reusable material, this material is used again in the second stage and the spent fuel of the second stage is reused for the third stage. This creates a closed chain where the fuel is being reused and recycled to maximize efficiency.

The country was able to successfully reach the first stage of the nuclear energy program in 2013 with over 22 nuclear reactors in 7 nuclear power plants. The country produces 6780 MW of nuclear energy. The country has already generated 755 billion units of electricity and has saved 650 million tons of CO2 emissions.

India is currently on the second stage of its ambitious nuclear program. The country is planning to construct 12 new nuclear power reactors by 2024. This will further reduce the price from Rs 4 (US$ 0.05) per unit to Rs 3 (US$ 0.03) per unit. This fall in the prices will further help to drive the country’s nuclear ambitions forward. The country will have their first-ever northern reactor by 2024. The country has 9 nuclear reactors already under construction, which will add 6700 MW of nuclear capacity. The country also has approved and sanctioned 12 more reactors with an additional capacity of 9000 MW. In 2019 the government had allotted the Department of Atomic energy a budget of Rs.10,000 crore (US$ 1.31 billion) and had a proposal to increase the budget by 10,000 crores (US$ 1.31 billion) per year for the next 10 years. The country has approved to set up the largest nuclear power plant in Jaitapur, Maharashtra. This power plant will produce 9900 MW of energy and will be the world’s most powerful nuclear power plant, which will create thousands of jobs. This project is going to be in collaboration with the French government.

The government has made several steps to increase nuclear power plant output in the country.

Future of Nuclear energy in India

India’s nuclear power could provide a reliable solution to India’s power demand as against wind and solar that is not available round the clock. This could further lead to a reduction in India’s contribution to global Green House Gases (GHG) which stood at 6.55%, with energy sector contributing a little over two-third towards it. India’s current nuclear power capacity of 6,790 MW is expected to increase to 22,480 MW by 2031. This in turn is going to assist the country in meeting zero energy targets along with other clean energy sources.