The Government of India is aiming to achieve 227 GW of renewable energy capacity by 2022, much ahead of its target 175 GW as per the Paris Agreement. 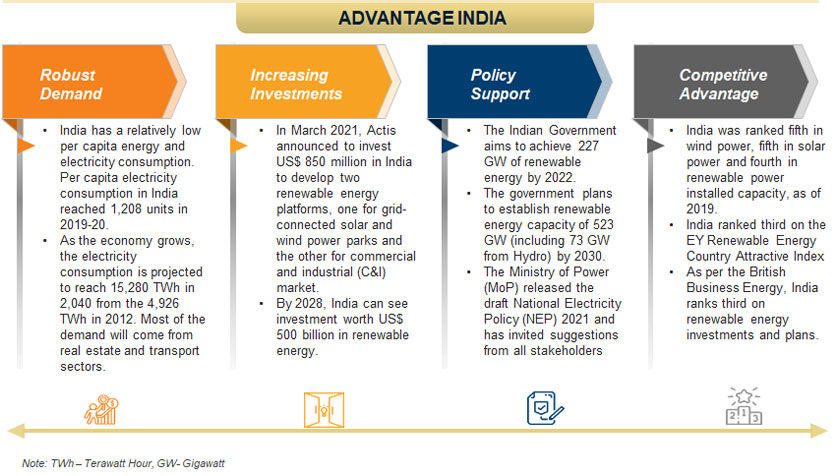 Installed renewable power generation capacity has gained pace over the past few years, posting a CAGR of 17.33% between FY16-20. With the increased support of Government and improved economics, the sector has become attractive from investors perspective. As India looks to meet its energy demand on its own, which is expected to reach 15,820 TWh by 2040, renewable energy is set to play an important role. The government is aiming to achieve 227 GW of renewable energy capacity (including 114 GW of solar capacity addition and 67 GW of wind power capacity) by 2022, more than its 175 GW target as per the Paris Agreement. The government plans to establish renewable energy capacity of 523 GW (including 73 GW from Hydro) by 2030.

According to the data released by Department for Promotion of Industry and Internal Trade (DPIIT), FDI inflow in the Indian non-conventional energy sector stood at US$ 9.83 billion between April 2000 and December 2020. More than US$ 42 billion has been invested in India’s renewable energy sector since 2014. New investment in clean energy in the country reached US$ 11.1 billion in 2018. According to the analytics firm British Business Energy, India ranked 3rd globally in terms of its renewable energy investments and plans in 2020.

Some major investments and developments in the Indian renewable energy sector are as follows:

Some initiatives by Government of India to boost India’s renewable energy sector are as follows:

The Government is committed to increased use of clean energy sources and is already undertaking various large-scale sustainable power projects and promoting green energy heavily. In addition, renewable energy has the potential to create many employment opportunities at all levels, especially in rural areas. The Ministry of New and Renewable Energy (MNRE) has set an ambitious target to set up renewable energy capacities to the tune of 227 GW by 2022, of which about 114 GW is planned for solar, 67 GW for wind and other for hydro and bio among other. India’s renewable energy sector is expected to attract investment worth US$ 80 billion in the next four years. About 5,000 Compressed Biogas plants will be set up across India by 2023.

It is expected that by 2040, around 49% of the total electricity will be generated by renewable energy as more efficient batteries will be used to store electricity, which will further cut the solar energy cost by 66% as compared to the current cost. *Use of renewables in place of coal will save India Rs. 54,000 crore (US$ 8.43 billion) annually3. Renewable energy will account for 55% of the total installed power capacity by 2030.

As per the Central Electricity Authority (CEA) estimates, by 2029-30, the share of renewable energy generation would increase from 18% to 44%, while that of thermal is expected to reduce from 78% to 52%.

According to the year-end review (2020) by the Ministry of New and Renewable Energy, another 49.59 GW of renewable energy capacity is under installation and an additional 27.41 GW of capacity has been tendered. This puts the total capacity of renewable energy projects (already commissioned or in the pipeline) at ~167 GW.

The Government of India wants to develop a ‘green city’ in every state of the country, powered by renewable energy. The ‘green city’ will mainstream environment-friendly power through solar rooftop systems on all its houses, solar parks on the city’s outskirts, waste to energy plants and electric mobility-enabled public transport systems.

Overview
In India, the real estate sector is the second-highest employm...

Role of the EIB in Climate and Environmental Sustainability
The Europea...