India is the third-largest producer and second-largest consumer of electricity in the world and had an installed power capacity of 373.43 GW as of October 2020. 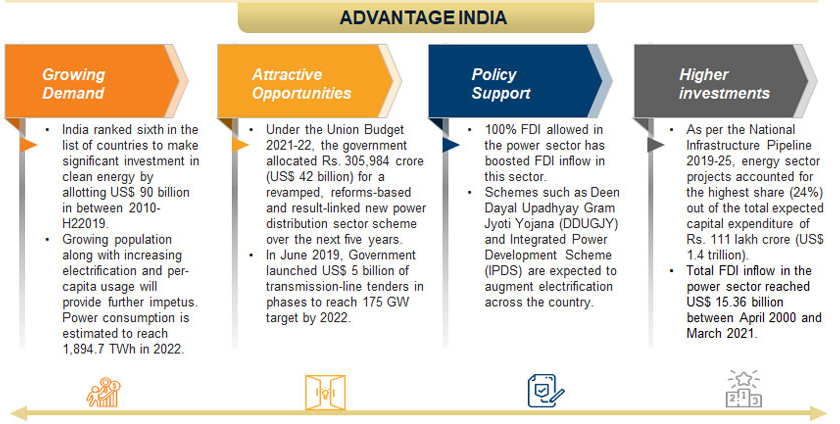 Power is among the most critical component of infrastructure, crucial for the economic growth and welfare of nations. The existence and development of adequate infrastructure is essential for sustained growth of the Indian economy.

India’s power sector is one of the most diversified in the world. Sources of power generation range from conventional sources such as coal, lignite, natural gas, oil, hydro and nuclear power to viable non-conventional sources such as wind, solar, and agricultural and domestic waste. Electricity demand in the country has increased rapidly and is expected to rise further in the years to come. In order to meet the increasing demand for electricity in the country, massive addition to the installed generating capacity is required.

In May 2018, India ranked fourth in the Asia Pacific region out of 25 nations on an index that measured their overall power. India was ranked fourth in wind power, fifth in solar power and fifth in renewable power installed capacity as of 2018. India ranked sixth in the list of countries to make significant investments in clean energy at US$ 90 billion. India is the only country among the G20 nations that is on track to achieve the targets under the Paris Agreement.

Indian power sector is undergoing a significant change that has redefined the industry outlook. Sustained economic growth continues to drive electricity demand in India. The Government of India’s focus on attaining ‘Power for all’ has accelerated capacity addition in the country. At the same time, the competitive intensity is increasing at both the market and supply sides (fuel, logistics, finances, and manpower).

By 2022, solar energy is estimated to contribute 114 GW, followed by 67 GW from wind power and 15 GW from biomass and hydropower. The target for renewable energy has been increased to 227 GW by 2022.

Between April 2000 and March 2021, the industry attracted US$ 15.33 billion in Foreign Direct Investment (FDI), accounting for 3% of total FDI inflow in India.

Some major investments and developments in the Indian power sector are as follows:

The Government of India has released its roadmap to achieve 227 GW capacity in renewable energy (including 114 GW of solar power and 67 GW of wind power) by 2022. The Union Government of India is preparing a 'rent a roof' policy for supporting its target of generating 40 gigawatts (GW) of power through solar rooftop projects by 2022.

Coal-based power-generation capacity in India, which currently stands at 199.5 GW, is expected to witness total installed capacity addition of 47.86 GW by 2022.

LOOKING TO THE SUN

India has set a target of generating 10,000 megawatt of power through solar energy by the year 2017.