The Indian defence sector is strategically important to India. In 2021-22, the government allocated Rs. 4,78,196 crore (US$ 62.8 billion) to defence, 1.5% higher than the previous year. This accounts for 2.15% of GDP and 13.73% of total central government expenditure. In 2020-21, India was the third largest military spender and had the second largest army globally. In view of these factors, coupled with access to nuclear weapons, India is recognised as a strong military power.

The defence manufacturing industry is poised for significant growth considering the increasing security threats faced by India, thereby boosting demand for defence equipment. Incentivised by various government reforms, India is quickly ramping up its manufacturing capacity. It also aims to reduce import dependence, which can be ascribed to the defence import programme launched in the 1980s due to lower manufacturing capacity in domestic markets and better technology of foreign countries.

Make in India and Other Government Initiatives Boosting Defence Manufacturing

Under the Make in India initiative, the Indian government focuses on minimising import dependence, increasing domestic capacity and modernising armed forces. It plans to achieve these by scaling up domestic manufacturing capacity by promoting local Micro Small and Medium Enterprises (MSMEs) and bigger defence manufacturers and by inviting foreign manufacturers to start operations in India. Moreover, the government has announced various reforms on aerospace and defence manufacturing policy to provide a fillip to defence equipment manufacturers in India.

Some of the initiatives are as follows:

India’s defence manufacturing industry is going through rapid changes, and higher demand is expected due to national security concerns. To meet this demand, the domestic share is likely to increase, given the various schemes introduced by the government. For example, the import ban on helicopters and aircraft is anticipated to profit Indian defence vehicle manufacturers, especially the defence aircraft manufacturers in India. Furthermore, the requirement for higher indigenous content is expected to help defence product manufacturers in India as well as encourage foreign companies to set up operations in India. France and Russia have already agreed to manufacture in India. 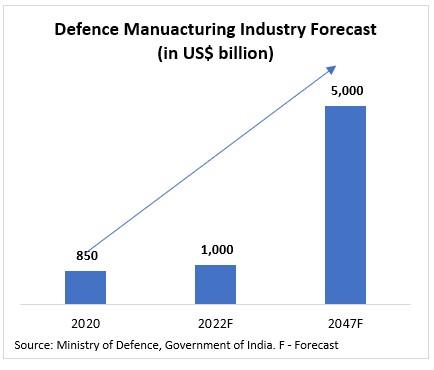