Introduction
Exports are recognized as a key driver of economic growth. Between January-October 2021, India exported goods worth US$ 325 billion representing a 44% YoY growth. Free trade agreements (FTAs) enable Indian exporters to compete on a more level playing field with local businesses from other countries due to reduced trade barriers, tariffs and duties. Through these FTAs, India plans to tap into the global demand, particularly in developed countries where growth has been strong since 2021. Mr. Piyush Goyal, Minister of Commerce & Industry, Consumer Affairs, Food & Public Distribution and Textiles, stated in January 2022 that India is now changing the way it approaches FTAs.

What is a Free Trade Agreement (FTA)?
FTA is a treaty between two or more countries that reduces or eliminates barriers to trade between the countries. It helps to strengthen the commercial ties between the member countries.

Benefits of a Free Trade Agreement:
While an FTAs focus is mainly on economic benefits and ensuring efficient and profitable trade between two countries, some of the other benefits include:

Current scenario of FTAs in India:
Mr. Goyal stated that India would no longer agree to FTAs just to be part of a group of countries; instead, India will enter into an FTA only if it is beneficial to the country. FTAs are supposed to be about two-way traffic, so India will look for reciprocal benefits and favourable market conditions from other countries. India will attempt to enter into FTAs with democratic nations that share the same values as them and are conducive to the mutual growth of both countries.

Mr. Goyal has also asked for increased input from industry associations. He wants them to be more involved by giving suggestions on issues related to FTAs, non-tariff barriers, and market access. They can identify areas where compliance costs can be reduced and make recommendations for areas where the legal structure should be streamlined. 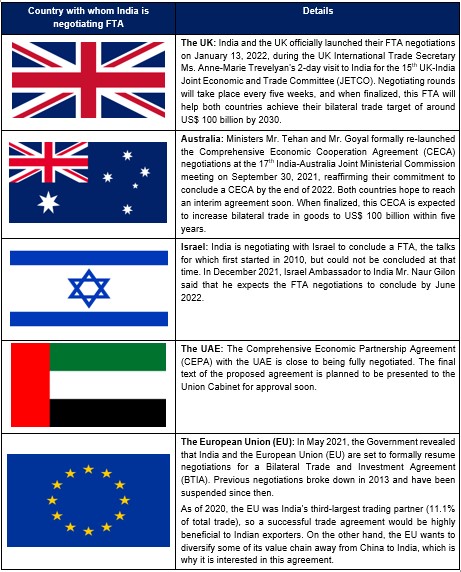 Outlook:
Over the last couple of years, FTAs have assumed newfound importance to an otherwise trade conservative regime. Currently, Japan is the only G7 member with whom India has an FTA. Once the FTAs currently being negotiated are concluded, India would have FTAs with all G7 countries except the US, which will increase India's engagement with the group. The FTAs currently being negotiated are comprehensive in scope and coverage. From a negotiation perspective, India is not looking at trade and investments separately. Its choice of FTA partners is guided by a comprehensive approach that includes trade and investment potential, enabling more Indian enterprises to connect to global supply chain networks.