India is the world’s second largest mobile phone manufacturer after China. And with the current pace of growth, India is not far from becoming the leading handset market in the world. According to the Indian Cellular Association (ICA), the annual production of mobile phones within the country has increased from 3 million devices in 2014 to 11 million devices in 2017. India now accounts for 11 percent of global mobile production, which was only 3 percent in 2014. In fact, the telecom industry today is amongst the top five employment opportunity generators in India, creating over four million direct and indirect jobs over the next few years, according to Randstad India.

Another feather in India’s cap is that during the first quarter of 2018, India became the world’s fastest- growing market for mobile applications. In May 2017, the Indian government announced the Phased Manufacturing Programme (PMP) to promote domestic production of mobile handsets. This initiative is helping build a robust indigenous mobile manufacturing ecosystem in India, and incentivize large scale manufacturing. The PMP has successfully helped in nudging companies to move towards manufacturing from direct imports. According to the ICA, the total capital investment by device and component players by the end of 2018 under the PMP is expected to hit INR 57 billion. In fact, Pankaj Mohindroo, President of the ICA says, “I am very hopeful that in the next two years, with such conducive policies, there would be additional massive investments coming into the mobile components sector.”

With more than 100 players, the mobile phone market in India has grown exponentially in the past decade, and with the emergence of smartphones, the growth has increased exponentially. 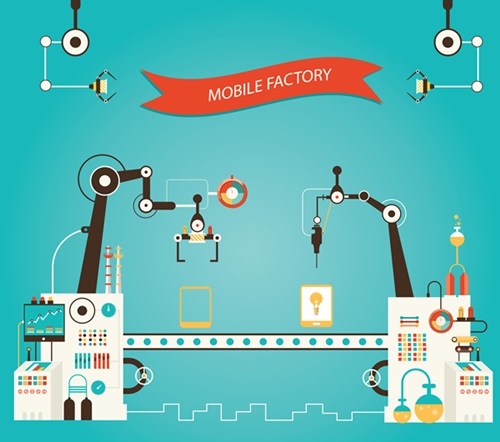 Last year, India overtook the United States to become the world’s second-largest smartphone market, after China. Statistics suggest that there will be 780 million connected smartphones in 2021, compared with 359 million in 2016, according to a study by Cisco Systems. Smartphone makers from Xiaomi Corporation to Oppo Mobiles are building factories in the world’s fastest growing market for the product bolstering push by the Indian Government, to encourage overseas investors to ‘Make in India’. India’s smartphone market grew 14 percent with total shipments of 124 million units in 2017, the fastest pace of growth among the top 20 markets, according to International Data Corporation (IDC). Demand for new phones is surging in India, helped in part by the Indian major, Reliance Group, offering USD 23 4G feature-phones, free voice services and cheap data plans. Further, Xiaomi said in April that it will set up three more factories in India.

India accounts for 30 million smartphone purchases every quarter, and this percentage keeps increasing several times a year. According to IDC and the Ericsson Mobility Report, mobile subscriptions in India are expected to rise to 1.4 billion by 2021.

This is the reason why smartphone makers like Apple and Samsung consider Indian consumer preferences while incorporating changes and new features in their devices. India being a huge market, wants and desires of Indian customers have a big impact on sales.

Being a price sensitive market, the sub-10,000 segment of smartphones has seen the highest sales since 2012. Every smartphone maker wants to capitalize on the demand for budget devices with sub-10,000 offerings. From local brands like Micromax to Karbonn to foreign brands like Samsung, Xiaomi and HTC, budget smartphones have flooded the market.

Samsung Electronics Company has opened the world’s largest mobile phone factory in India, in a win for the Indian Prime Minister Shri Narendra Modi’s flagship program to lure investors to manufacture in the country. This will double Samsung’s Noida unit capacity for mobile phones to 120 million units a year from 68 million. The company has taken the ‘Make in India’ initiative to another level by launching ‘Make for the World’ initiative as part of which it aims to export mobile handsets produced in India, to overseas markets.

The Samsung factory is making everything from low-end smartphones that cost under USD 100 to its flagship models. “The new facility gives Samsung an advantage by reducing the time to market and will help Samsung bring some local features to the devices powered by R&D here”, says Tarun Pathak, Associate Director at Counterpoint Research.

The mobile phone manufacturing industry is expected to reach a size of USD 217 billion by 2020. Moreover, rise in mobile-phone penetration and decline in data costs will add 500 million new internet users in India over the next five years. Fast Track Task Force (FTTF), under the Indian Ministry of Electronics and IT, estimates a 500 million mobile phones production in India by 2019, valued at USD 46 billion. The target is also to create a component manufacturing production worth USD 8 billion and employment worth USD 1.5 million by 2019. The factors that will ensure the market remains on an upward curve, including low smartphone penetration, ease of foreign investment in India, and the ascendency of Long-Term Evolution.