India has the potential to become a healthcare delivery hub in the world as >10% of doctors in the US are of Indian origin and >20,000 Indian doctors are currently practicing in the National Health Service (NHS), UK. India is a major source of nurses to countries such as Philippines, Saudi Arabia, Germany, UAE, Belgium, Ireland and Malta. These countries prefer Indian nurses and often provide better salaries and free accommodation. Global acceptance of Indian healthcare workers certifies that the quality of medical education in India is at par with global standards, as medical education in the country focuses on upskilling. This is a key growth driver as it can help the country become self-reliant and extend healthcare support to other countries. In early 2021, the Ministry of Skill Development and Entrepreneurship (MSDE), identified the healthcare sector as a major employment booster. MSDE aims to outsource 300,000 healthcare workers to countries such as US, UK, Germany, Australia, Japan, Sweden and Singapore by 2022.

Growth of Medical Education in India
With increasing global demand for qualified doctors graduating from India, scarcity of medical doctors is now a major problem in the country, making it imperative to focus on medical education. The Mudaliar Committee a.k.a. the ‘Health Survey and Planning Committee, 1962’ suggested one medical college for 50 lakh people and a doctor-population ratio of 1:3000. However, the need of the hour is to have a doctor-population ratio of 1:1000, as recommended by the World Health Organization (WHO).

Growth of medical colleges and admissions in India 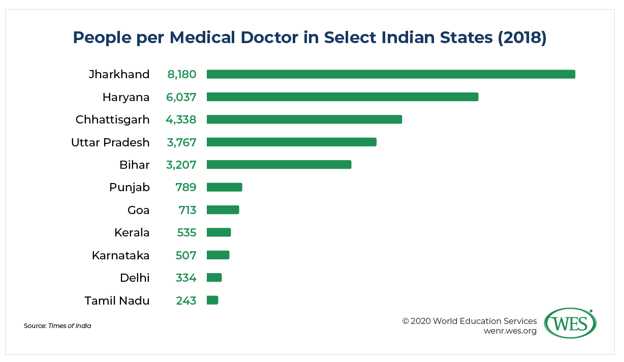 Government Initiatives in Medical Education
The Government of India, from time to time supports the healthcare sector with enhanced health policies and infrastructure. However, in the past few years, the government has realised the importance of improving the quality of education and training for healthcare workers. Some key initiatives undertaken by the government include — increasing medical student capacity, setting up new colleges and funding the expansion of existing colleges. The following government initiatives played a major role in the revival of the Indian medical education sector:

National Medical Commission (NMC) – In August 2019, a major reform package, the National Medical Commission (NMC) Bill, 2019, was formed with an aim to ‘curb avenues of corruption and boost transparency… accountability and quality in the governance of medical education.’ The commission intends to increase the number of medical seats and reduce the cost of medical education, thus encouraging more students to join medical professions. Other important reforms under the NMC include revamping medical licensing procedures, rating medical colleges and standardisation of admission requirements at medical schools, countrywide. Additionally, four mutually independent and autonomous boards — Under-Graduate Medical Education Board, Post-Graduate Medical Education Board, Medical Assessment and Rating Board and the Ethics and Medical Registration Board, were created to support NMC objectives. The NMC policy is a replacement of the earlier Medical Council of India (MCI) which failed to materialise.

Implementation of competency-based medical education (CBME) – In 2019, the Medical Council of India (MCI), rolled out the globally acknowledged CBME for MBBS students. The CBME syllabus aims to shift the content-based curriculum to one that adapts a practical approach and aligns with the changing health needs of the country. CBME promotes holistic development of students through new curriculum changes aimed at addressing the lack of language, communication and computer skills. Weightage is also given to regular assessments and integration of globally recognised techniques such as Objective Structured Clinical Evaluation (OSCE) and miniclinical evaluations. Overall, CBME promotes development of competencies that are essential for a physician.

Other reforms to improve medical education –

Regulation of fees: Cost of medical education in India is a prime concern. Hence, in early 2020, NMC announced several fee regulations, as private colleges have a higher fee structure making it impossible for financially weak but meritorious students study further. The proposed norms will cap tuition fees for 50% MBBS and postgraduate medical seats in private medical colleges and universities.

Relaxed land requirement standards: In November 2020, NMC relaxed the minimum standard requirement for land used in building medical colleges and made skill labs compulsory. NMC removed the mandate to have 20 acres of land for general areas and 10 acres for metropolitans.

The Road Ahead…
Indian medical education is rising side by side with the healthcare industry due to the country’s huge population, global demand for physicians, reformed government mandates and innovations in drugs and medical technology. The restructured schemes in medical education, implemented in the last six years, have addressed various challenges in the form of reducing skyrocketing tuition fees and ambiguity in college systems, increasing medical seats, improving the curriculum, bridging the gap between rural and urban medical colleges and easing the process to open medical colleges. While there is still a shortage of medical staff, the reforms are expected to address this gap in the future. All the reforms mentioned above will cater to changing trends in medical education and have a long-term impact on primary, secondary and tertiary healthcare services in India.