With more than 600 million internet users in 2019, India is one of the largest and the fastest growing markets for digital consumers. This substantial growth of digital economy was largely led by consumers in the urban region. However, with the government’s push towards financial inclusion, rural India have also started embracing the digital economy. As per the TRAI report, rural internet subscribers account for more than 38% of the total internet subscribers in the country as of March 2020, increasing from about 32% in March 2017.

Despite the growing number of internet users in rural India, there exists a significant digital divide between urban and rural India. As per the latest TRAI report, internet penetration in rural India was only about 33% compared to 99% in Urban India. This gap mainly stems from two factors – lack of infrastructure and awareness.

These initiatives by the government are expected to have a positive impact for the digitization of rural India. Two of the sectors that are stated to benefit from the digitization initiative are the agriculture and the financial sector. 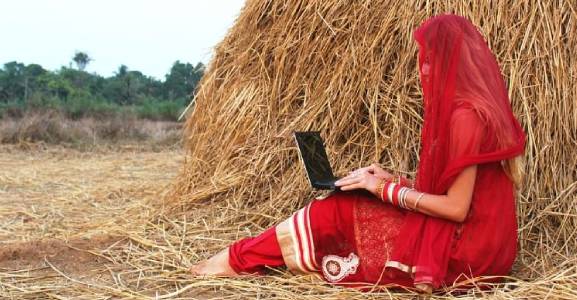 Agriculture sector represents about 18% of India’s GDP and accounts for more than 50% of the total workforce. Despite the sector’s significant contribution, India’s agriculture sector is highly dependent on human labour and good rainfall unlike the agriculture sector in developed economies that rely on mechanized farming and better planning.

Realizing that technological agricultural systems are the need of the hour, the Indian government has launched the ‘Kisan Suvidha’ app which has about 100 million registered users. This app assists farmers with relevant information on the weather of the current day and next five days, market prices, dealers, agro advisories, and plant protection. Sensing the huge potential, a few start-ups like SatSure, CropIn, Niruthi, AgRisk are also entering the space. These startups along with the digital government programmes help the farmers in sowing and crop monitoring, capturing and analyzing various data points, including crop, soil, and weather data, all of which can assist in decision making and facilitate  access to crop insurance and institutional credit.

While agriculture presents a huge opportunity, the rural financial sector is also on the cusp of digital revolution. Over the last five to six years, several policy and financial initiatives aimed at inclusive rural growth have been rolled out by the government. Aadhaar, a unique biometric identifier, zero balance Jan Dhan savings bank accounts, direct transfer of social benefit payments, and the digital payment infrastructure BHIM are just some of them. The bank account penetration increased from 54% in 2014 to 80% in 2018 on the back of these initiatives.

Increase in banking penetration presents a significant opportunity for the start-ups and the incumbent players specially in the payments and distribution of financial products space. Start-ups like Jai Kisan and FIA technology are bridging the digital gap in rural India by offering financial products and services. Incumbent players, like Paytm have also expanded their services and claims to have presence in more than 3 lakh villages across India. The company also claims to have on-boarded more than 30 lakh merchants accepting digital payments in smaller towns.

Sensing that the internet connectivity is a big hurdle for digital payments in rural India, the Reserve Bank of India (RBI) is also pushing forward for offline solutions. Offline payments are transactions that are either processed without a data connection or where the transaction is recorded offline and processed at a different point of time. In August 2020, RBI rolled out a pilot scheme for small value payments (maximum up to Rs 200) in offline mode at retail outlets.

A few payment companies have already started developing offline solutions before the RBI announcement.  Google Pay partnered with Pine Labs in 2019 to allow merchants to initiate payment requests by punching in a customer’s mobile number on their PoS devices, while Paytm launched a Tap-to-Pay card (NFC based) in 2018, through which customers could load money onto the card, with or without the internet, and pay merchants by tapping the card on the merchants’ terminal.

These initiatives by the government and the effort from the private sector are huge steps towards digitizing rural India, but touch just a fraction of the rural population. As smartphone penetration and mobile data usage grows in rural India, governments, regulatory bodies, financial service providers and fintech companies need to collaborate to unlock the potential of a digital rural India. The next few years will witness the increased deployment of new digital technologies like big data analytics, machine learning, blockchain, cloud computing and artificial intelligence (AI) which will be used to offer products beyond cities and in rural areas.