India scored a perfect 10 in protecting shareholders' rights in 2017.

Clearly the mood is buoyant, but not in an irrational way!

India has a diversified financial sector undergoing rapid expansion, both in terms of strong growth of existing financial services firms and new entities entering the market. The sector comprises commercial banks, insurance companies, non-banking financial companies, co-operatives, pension funds, mutual funds and other smaller financial entities. The banking regulator has allowed new entities such as payments banks to be created recently thereby adding to the types of entities operating in the sector. However, the financial sector in India is predominantly a banking sector with commercial banks accounting for more than 64 per cent of the total assets held by the financial system.

The Government of India has introduced several reforms to liberalise, regulate and enhance this industry. The Government and Reserve Bank of India (RBI) have taken various measures to facilitate easy access to finance for Micro, Small and Medium Enterprises (MSMEs). These measures include launching Credit Guarantee Fund Scheme for Micro and Small Enterprises, issuing guideline to banks regarding collateral requirements and setting up a Micro Units Development and Refinance Agency (MUDRA). With a combined push by both government and private sector, India is undoubtedly one of the world's most vibrant capital markets. In 2017,a new portal named 'Udyami Mitra' has been launched by the Small Industries Development Bank of India (SIDBI) with the aim of improving credit availability to Micro, Small and Medium Enterprises' (MSMEs) in the country. India has scored a perfect 10 in protecting shareholders' rights on the back of reforms implemented by Securities and Exchange Board of India (SEBI).

Furthermore, India’s leading bourse Bombay Stock Exchange (BSE) will set up a joint venture with Ebix Inc to build a robust insurance distribution network in the country through a new distribution exchange platform.

Clearly the mood is buoyant, but not in an irrational way!

Turnover on NSE (Capital markets segment) in US$ billion 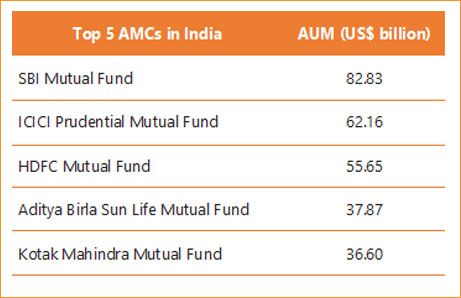 India is the world’s second largest mobile phone manufacturer after China. And with the current pace of growth, India is not far from becoming the leading handset m...