Ever expanding domestic tourism, increasing foreign tourist arrivals, forex earnings growth, high airline passenger numbers and muted supply growth has put the Indian hotels industry on an upswing. The recent trends and statistics of the industry as well as improving domestic macroeconomic data suggest the road ahead will bring higher room revenues and profit margins for the hotels industry in the country.

According to the market reports Indian hotel industry was able to overthrow the 65% occupancy rates threshold last year (2017). The yearly report titled ‘Hotels in India Trends & Opportunities’ by the global hospitality consulting firm HVS suggests that branded hotels in India touched the occupancy rate of 65.6 per cent in financial year 2017, as against 63.3 per cent in the previous year. It is after a decade that the Indian hotels industry has crossed the 65 per cent occupancy rate. The last time it happened in financial year 2008.

Push from the tourism boom

Travel and tourism has become a significant industry in the country over the last few years, thanks to the government initiatives and policies along with increasing foreign tourist arrivals. The World Trade and Tourism Council ranked India 18th in business travel and also predicted that it climb up soon to be amongst the top 5 ranks. Not just that, the travel & tourism industry provided employment to approximately 41.6 million people in the year 2017 and accounted for 8 per cent of the total employment opportunities generated in India in that year.

The ever expanding growth of the Indian travel and tourism industry has a cascading effect on the hotels industry, boosting the occupancy rate and the average room rate. 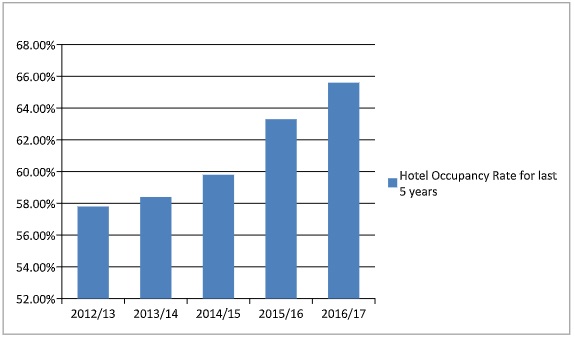 The key trends that have emerged in the Indian hotel industry are mentioned below:

Asset-light model: In the recent times, the asset-light model has gained significant importance with both international as well domestic biggies in the hotel industry opting for it. The trend was started in India by the major global hotel groups like Marriott and Accor and soon the domestic players like Taj, Oberoi, ITC and Leela are following suit.

Earlier this year (February 2018) Taj (from the Indian Hotels Company Ltd.) announced its five- year strategy revealing that by the year 2022, 60% of its assets will not be owned by the company. “Our strategy is three pronged: Restructure, Reengineer and Reimagine our portfolio to achieve 8% point EBIDTA margin improvement. This will be driven by a deep commitment to service excellence as well as implementation of revenue and profit-driving initiatives. Integral to our strategy of reinforcing the multi-product, multi-segment brand scape is our customer” said, Puneet Chhatwal, Managing Director and Chief Executive Officer, Indian Hotels Company Limited.

Even budget hotels like LemonTree which started with solely owned properties are adapting to this new model. In fact, 22 of its upcoming hotels which 1,775 rooms are under management contracts.

Mid-market boom: The mid-market refers to hotels falling under two/three/four-star properties categorized as business hotels, resorts, boutiques, havelis, and full-service or limited- service hotels with average pricing being INR 4,000 or less for a night.

An upsurge in travel of the middle class, increase in business and leisure travel, growing urbanization, strengthened economic growth and the doubling of air travel over the past seven years have boosted the mid-market brands in the hotel industry in India.

The mid-market of the Indian hotel industry mainly caters the domestic business and leisure travelers of the country. Driven by the travels of upper-middle class and middle-class the budget hotels hotels have a key role to play in the growth of this sector in the times to come.

Local flavor: Modern travelers including the millennials are more and more seeking to connect with the local people, culture and food while travelling. Many hotels adopting the strategy to weave in the destination and culture through various encounters for the guests by curating experiences around local cuisine, art, architecture, and rituals. For example, ITC Hotels’ Food Sherpa programme - where the hotel chef takes guests on a culinary tour of the city. Experts say, it is no more about a room, creating unique experiences will be key to win the guests.

Travellers want to mingle with locals, and hotels will need to facilitate that. Jean-Michel Cassé, chief operating officer, India and South Asia, AccorHotels, says, “At Novotel hotels, we are introducing opportunities for our guests to mix with locals through activities such as yoga sessions, guitar lessons and art classes to make our hotels more sociable places for locals and visitors alike. We will also create shared workspaces and invite local entrepreneurs into our hotels to work and socialize.” 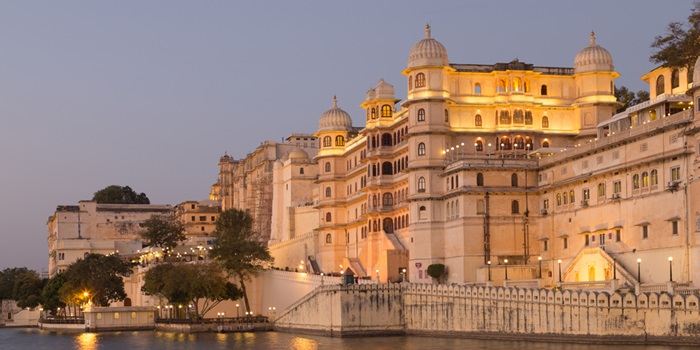 With the economy growing steadily and a stable inflow of investments coupled with fast growing FTAs and domestic travelers, the future of Indian hotel industry is predicted to be bright and shiny. The Indian credit rating agency ICRA estimates improvement in average room rates across most markets in India in the financial year 2019. It also predicted the corporate request for proposal rates for the current year to grow up by about 5 per cent.

The international hotel chains have significantly increased their footmark in India and it will account for 47 per cent share in the Tourism & Hospitality sector of India by 2020 & 50 per cent by 2022. Definitely, some tough international competition is in sight in the times to come for the local champions.

According to the Indian Hotel Industry Survey 2016-17, compiled by Hotelivate in association with the Federation of Hotel & Restaurant Associations of India (FHRAI), the Indian hotel industry is estimated to expand to be at 13 billion U.S. dollars by 2020. Certainly, the future shows good weather sign for the industry.