Basic overview of export incentive scheme
India exports around 7,500 commodities to about 190 countries and ranks 21st amongst the world nations on merchandise exports according to World Trade Organization (WTO). According to Ministry of Commerce and Industry, India’s merchandise export witnessed resilience despite the COVID-19 pandemic. Overall export for 2021-22 is expected to touch US$ 400 billion this fiscal. As of 14th March 2022, total export stood at US$ 390 billion and is growing at a monthly run rate of US$ 35 billion. Export plays a pivotal role in the economic development of a nation and for strong export there should exist favourable promotion schemes to increase trade.

The Government of India through the Directorate General of Foreign Trade (DGFT) has put forward various schemes to boost the export market by providing financial assistance and infrastructure facilities. Towns of Export Excellence (TEE) is one such initiative by the government as per the Foreign Trade Policy manual 2015-2020 (Extended up to 31st March 2022 due to COVID-19). Towns of Export Excellence is a status provided to those towns which produce and export goods worth a minimum value in a specific sector. Sectors include handicraft, handloom, seafood, pharmaceutical, fisheries, apparels, coir, leather products etc. Once a town is recognized as a TEE it helps in maximizing their potential and enable them to move higher in the value chain.

According to the Ministry of Commerce and Industry, towns producing goods worth Rs 750 crore (US$ 98.7 million) or more can be recognized as Towns of Export Excellence. For certain sectors like handloom, handicraft, agriculture, and fisheries the threshold limit is set at Rs 150 crore (US$ 19.7 million).

Major states/ towns covered
As of February 2022, 39 towns have been recognized by the central government as Towns of Export Excellence as per the Foreign Trade Policy. Government decides on the list of towns after consulting with industry associations as well as other stakeholders. Uttar Pradesh has the major number of towns recognized in TEE - 8 towns and product focused include leather, handicrafts, handloom etc while Tamil Nādu has six towns recognized as TEEs with focus on products like Handloom, leather, hosiery and marine. 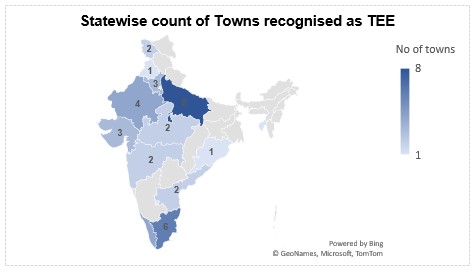 According to the Ministry of Commerce, across towns handlooms/textiles/apparels is a major product exported from towns listed under TEE and both handloom/textiles/apparel and handicraft accounts to 54% of the total products recognized in TEE. Towns like Tirupur in Tamil Nādu which was recognised as a TEE in 2003 is famous for hosiery and holds 52.5% share of total knitwear exports in the country. As of April-December 2021-22, total merchandise export value from Tirupur accounts to Rs 23,250 crore (US$ 3,060.2 million). Largest brands in the world like Nike, Tommy Hilfiger, Walmart, Next, Polo, outsource directly from Tirupur. Towns like Vishakhapatnam & Bhimavaram in Andhra Pradesh are famous for its sea food exports and towns in Uttar Pradesh which is famous for leather products and towns in Kerala like Kochi and Alappuzha which is famous for Coir and Cashew exports to name a few amongst the 39 towns. 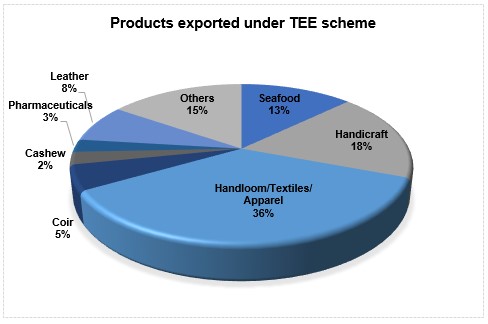 Benefits offered in the scheme
Towns recognized under TEE will receive promotional benefits from the government in the form of incentives or duty exemptions. As per the Foreign Trade Policy, major benefits under TEE scheme are:

Recent developments
Travel restrictions following the Outbreak of COVID-19 pandemic and geopolitical concerns has restricted the export promotion activities in the last 2 years. Trade activities across the globe has been impacted by shortage of container and vessels and freight costs increased up to five times. Looking at the incentive schemes in IndRia, the Market Access Initiative (MAI) scheme had an allocation of Rs 29.85 crore (US$ 3.91 million) which was approved to Export Promotion Councils (EPCs) and trade bodies for undertaking close to 244 virtual export promotion activities during FY 2020-21. However, activities are back on track as for FY 2021-22 an assistance of Rs 209.35 crore (US$ 27.5 million) has been approved under the scheme for EPCs and trade bodies, to conduct export promotion activities virtually/physically/hybrid basis according to the annual report published by department of commerce.

In the EPCG scheme around 10,060 authorizations have been issued with close to Rs 12,484 crore (US$ 1,643.4 million) duty saved. However, around 36 EPCG licenses have been issued to selected common service providers of TEE during the period FY 2020-21 (Data available up to December 2020) and duty saved amounted to Rs 12 crore (US$ 1.5 million) as per a recent filing in the parliament. 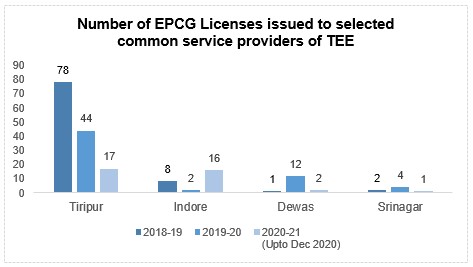 Road Ahead
Exports in India recovered strongly after the decline during the pandemic and is expected to continue its growth this fiscal as well. Even though, ongoing geopolitical unrest and supply disruptions has already created short term hiccups across the globe, on a long-term basis concerns are expected to fade. Recognizing the selected towns and providing incentives is expected to bring value addition to the nation as it will draw attention from global players. Upcoming Foreign Trade Policy 2021-2026 has set goal to make India a US$ 5 trillion economy and to make every district in India an export hub connecting with make in India initiatives which looks promising. More towns could be added under TEE in the future as well.