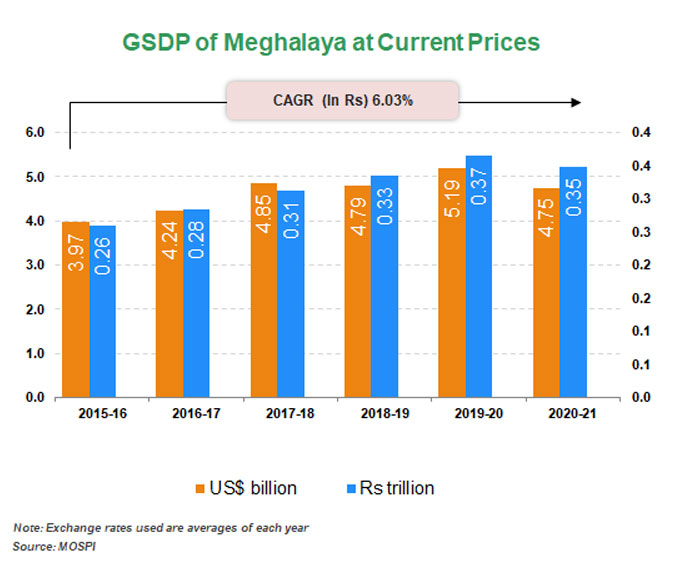 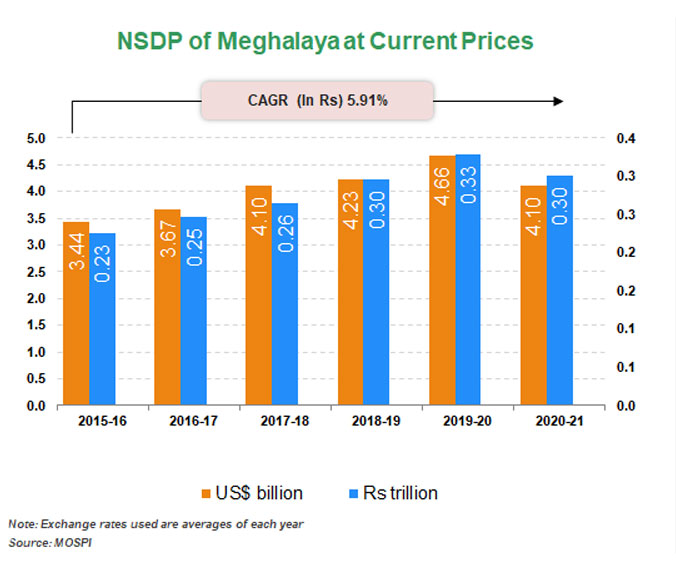 Meghalaya is located in the northeast of India. The state shares its border on the north and the east with Assam and on the south and the west with Bangladesh.

Meghalaya, with an average annual rainfall of 1,150 cm, receives the highest amount of rainfall in the country. The diverse range of soil types, including red-loamy and laterite, support various agricultural crops like rice, maize, pulses, oilseeds, cotton, jute, and mesta. The state has achieved success in the cultivation of non-traditional crops like tea, cashew nuts, oilseeds, tomato, mushroom, wheat, etc. During 2019–20*, the state produced 393.51 thousand tonnes of fruits and 75.38 thousand tonnes of spices.

Meghalaya, with abundant deposits of coal, limestone, kaolin feldspar, quartz, granite, industrial clay and uranium, and a small deposit base of sillimanite, bauxite, base metals and apatite has a great industrial potential.

Meghalaya, one of the most picturesque states in the country, has two national parks and three wildlife sanctuaries. It offers many adventure tourism opportunities like mountaineering, rock climbing, hiking and trekking, water sports, etc.

In FY21, passenger traffic at Barapani Airport reached 5,690 and aircraft movements at the airport stood at 146.

According to the Department for Promotion of Industry and Internal Trade (DPIIT), cumulative Foreign Direct Investment (FDI) inflow in Meghalaya** stood at US$ 122 million, during April 2000 and September 2019.

Total merchandise exports from Meghalaya stood at US$ 10.64 million in FY21.