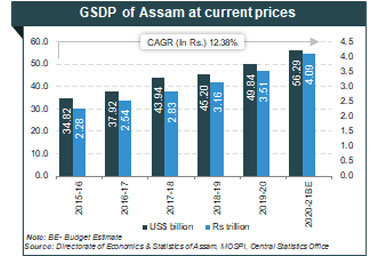 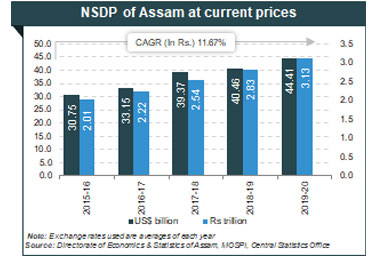 Assam is the largest economy in the northeast region. Owing to its relative proximity to the rest of the country and availability of quality infrastructure, the state offers a favourable environment for industry.

Exports from the state stood at US$ 415.57 million in FY21. Assam exported key items such as tea, petroleum products, coal, coke and briquettes and other products. In FY21, the total tea exports from Assam accounted for US$ 217.89 million, which was 64% of the total export.

To facilitate infrastructure support, the State Industries and Commerce Department has sponsored three projects as industrial growth centres at Chariduar, Matia and Chaygaon-Patgaon.

The Assam Government has approved 11 integrated infrastructure development centres across the state. Some of the major initiatives taken by the Government to promote Assam as an investment destination are: