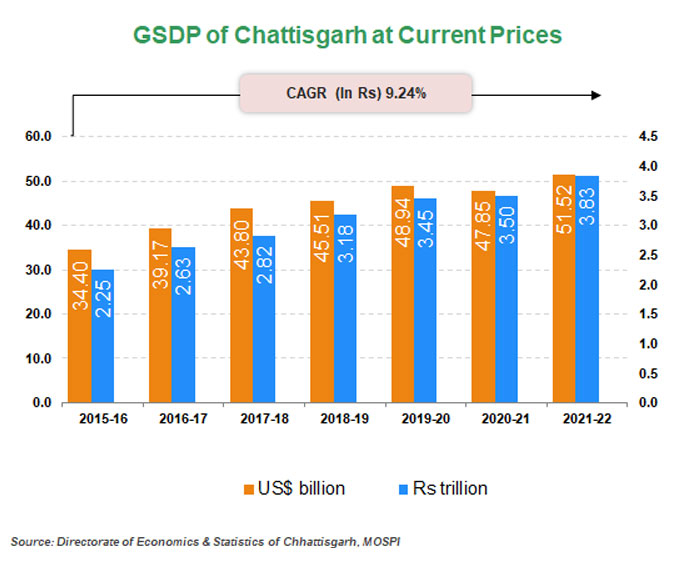 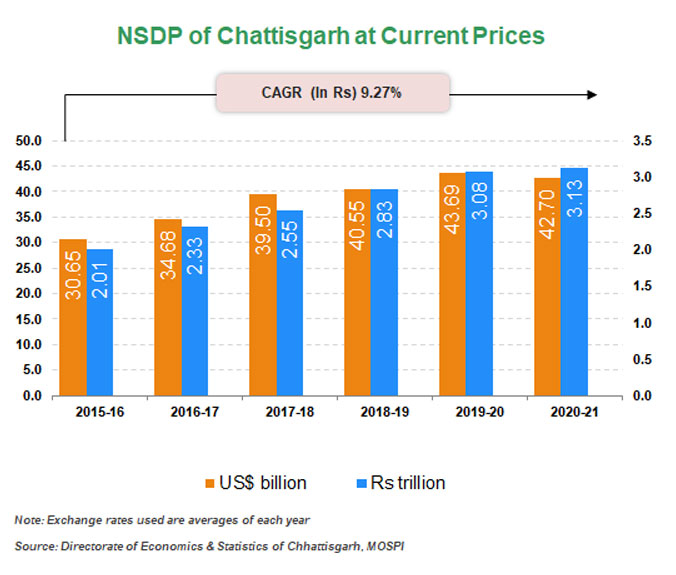 Chhattisgarh is in the central part of India. The state shares its border with Madhya Pradesh and Maharashtra in the west, Uttar Pradesh in the north, Odisha and Jharkhand in the east, and Andhra Pradesh and Telangana in the south.

Chhattisgarh is presently one of the few states that have surplus power. Korba district in Chhattisgarh is known as the power capital of India. It is also among the few profitable states in terms of utility-based electricity. As of April 2021, Chhattisgarh had a total installed power-generation capacity of 13,076.27 MW, comprising 8,229.83 MW under private utilities, 1,971.05 MW (state utilities) and 2,875.39 MW (central utilities). Energy requirement in the state was 27,303 million units in 2019-20.

Mineral resources are Chhattisgarh's biggest strength. It is a leading producer of minerals such as coal, iron ore and dolomite. Moreover, considerable reserves of bauxite, limestone and quartzite are available in the state. The state accounts for 35.4% of tin ore reserves of India. Chhattisgarh is the only state in India that produced tin concentrates.

Chhattisgarh has emerged as one of the most preferred investment destinations in India. The state (including Madhya Pradesh) attracted cumulative Foreign Direct Investment (FDI) worth US$ 1.43 billion between April 2000 and March 2020. Between October 2019 and March 2021, FDI inflow in Chhattisgarh stood at US$ 0.03 million. During 2019, 61 Industrial Entrepreneurs' Memorandum (IEMs) were filed in Chhattisgarh with a proposed investment of Rs. 5,132 crore (US$ 743.30 million).

A wide range of fiscal and policy incentives for businesses were announced under its Industrial Policy, 2014-19. Additionally, the state has well-drafted policies for the IT/ITeS, solar energy, agro and food processing, minerals and biotechnology sectors. Chhattisgarh stands fourth among Indian states in rankings based on ease of doing business and reforms implementation, according to a study by the World Bank and KPMG.