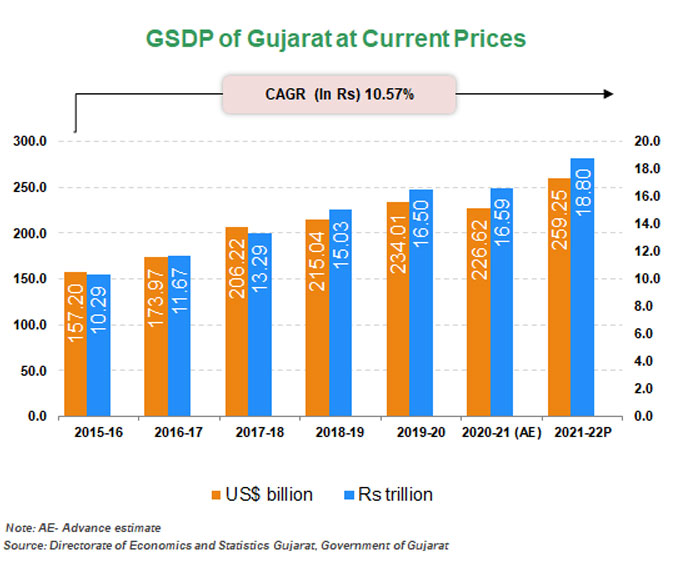 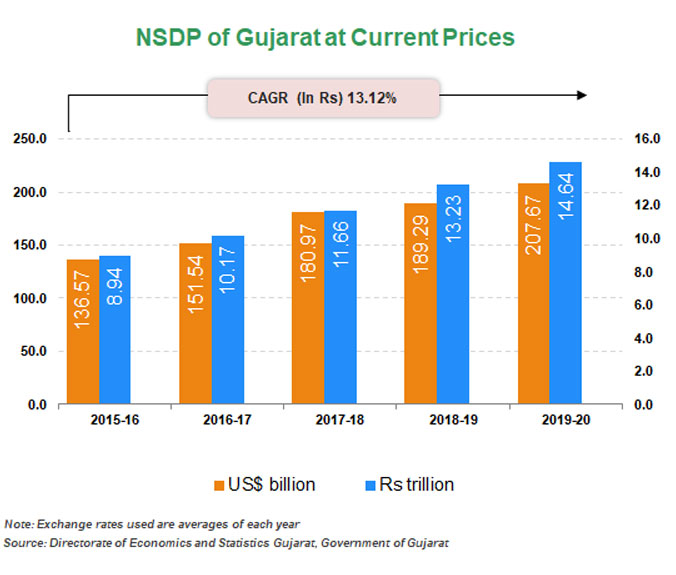 Gujarat is located on the western coast of India and has the longest coastline of 1,600 kms among all the states in the country. The state shares its borders with Rajasthan, Madhya Pradesh, Maharashtra, and the Union Territories of Daman and Diu and Dadra and Nagar Haveli. The Arabian Sea borders the state on the west and the southwest.

Gujarat is one of the leading industrialised states in India. At current prices, Gujarat’s Gross State Domestic Product (GSDP) is estimated at Rs. 18,79,826 crore (US$ 259.25 billion) in FY22, an increase of 7% YoY.

Gujarat is considered the petroleum capital of India due to presence of large refining capacity set up by private and public sector companies.

The state is the world’s largest producer of processed diamonds, accounting for 72% of the world’s processed diamond share and 80% of India’s diamond exports. With a contribution of 65 to 70% to India’s denim production, Gujarat is the largest manufacturer of denim in the country and the third largest in the world. There are 42 ports, 18 domestic airports and one international airport. There are 106 product clusters and 60 notified special economic zones (SEZs). Large scale investment is expected in Gujarat as part of the US$ 90 billion Delhi-Mumbai Industrial Corridor (DMIC).

According to the Department for Promotion of Industry and Internal Trade (DPIIT), in FY21, Sugg: Gujarat received the highest FDI (Foreign Direct Investment) at US$ 21.89 billion and stood at the top of all states, with 30% of the total equity inflows.