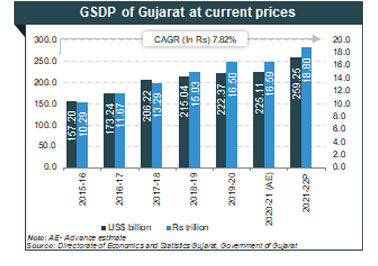 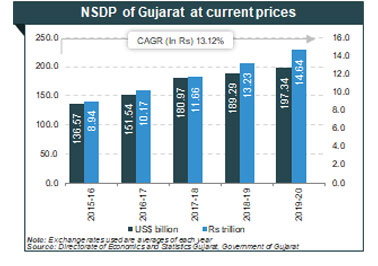 Gujarat is one of the leading industrialised states in India. At current prices, Gujarat’s Gross State Domestic Product (GSDP) is estimated at Rs. 18,79,826 crore (US$ 259.25 billion) in FY22, an increase of 7% YoY.

Gujarat is a leader in industrial sectors such as chemicals, petrochemicals, dairy, drugs and pharmaceuticals, cement and ceramics, gems and jewellery, textiles and engineering. The industrial sector comprises of over 800 large industries and 453,339 micro, small and medium enterprises.

According to the Department for Promotion of Industry and Internal Trade (DPIIT), in FY21, Sugg: Gujarat received the highest FDI (Foreign Direct Investment) at US$ 21.89 billion and stood at the top of all states, with 30% of the total equity inflows.

Following are some of the major initiatives taken by the Government to promote Gujarat as an investment destination: