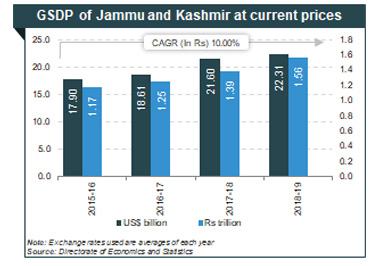 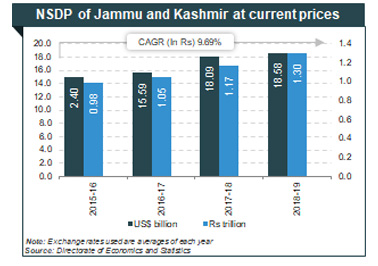 Jammu and Kashmir (J&K) is a Union Territory (UT) of India, located in the country’s northern part, and a global tourist destination. In addition to traditional recreational tourism, a vast scope exists for adventure, pilgrimage, spiritual, and health tourism.

A vast natural resource base has enabled J&K to develop land for cultivating major fruits. With varied agro-climatic conditions, the scope for horticulture is significantly high in J&K. Food processing and agro-based industries (excluding conventional grinding and extraction units) thrive in the UT. J&K has an ideal climate for floriculture and an enormous assortment of flora and fauna. J&K has Asia’s largest tulip garden.

J&K’s handicrafts are world famous and the traditional handicraft industry has emerged as a large industry. Due to its large employment base and export potential, the industry has been receiving priority attention of the government. The UT is also famous for its small-scale and cottage industries such as carpet weaving, silks, shawls, basketry, pottery, copper and silverware, papier-mâché, and walnut wood. The cottage handicrafts industry provides direct and gainful employment to around 340,000 artisans.

The following are some of the major initiatives taken by the Government to promote Jammu & Kashmir as an investment destination: