Ladakh, also known as the ‘Land of High Passes’, is the northernmost, largest and the second least populous UT of India and was formed on October 31, 2019. The UT shares borders with Himachal Pradesh and Jammu & Kashmir and its neighbouring countries are Pakistan, China and Afghanistan.

In Ladakh, tourism is one of the key areas that plays a vital role in generating revenue, jobs and overall growth of regions. Ladakh has been recognised for its diverse topology with high-altitude cold desert located in the Great Himalayas and picturesque locations since 1974.

Hemis, Alchi, Lamayuru, Shey and Thiksay are some of the most popular monasteries of Ladakh that attract both domestic and foreign tourists. The Pangong Tso lake and world’s highest motorable road, Khardongla (18,350 feet), are the main attractions for domestic tourists, while monasteries and mountains are hotspots for foreign tourists.

Total tourist arrivals to the UT reached 279,937 in 2019, out of which 241,285 were domestic tourists and 38,652 were foreign tourists. Until June 2020, total tourist arrivals in Ladakh were 6,079, of which 5,019 were domestic and 1,060 were foreign tourists. On April 20, 2020, the Ministry of Tourism conducted its 5th webinar on the rich heritage of Ladakh titled ‘Ladakh: Explore the Unexplored’ under the ‘DekhoApnaDesh’ webinar series.

Currently, only two roads connect Ladakh to the rest of India with limited access during winter. Ladakh has ~4,300 kms of road with 39% under PWD and 61% under BRO. In March 2021, the central government announced to a parliamentary panel that a ‘standalone project’ to build a critical road in Ladakh, along the border with China, is in progress.

The following are some key initiatives taken by the government to promote Ladakh as an investment destination: 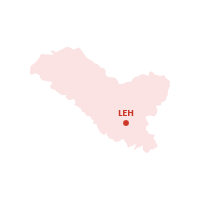