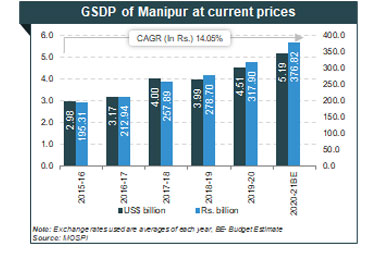 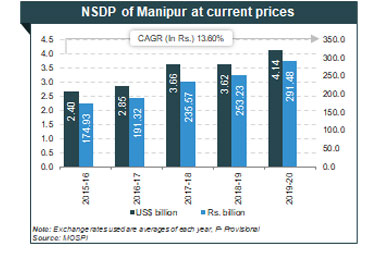 Manipur is situated in the eastern-most corner of northeast India. The state shares borders with other northeast states like Nagaland, Mizoram, and Assam as well as with the neighbouring country of Myanmar. Due to its wealth of flora and fauna, Manipur is described as a ‘flower on lofty heights’, ‘a jewel of India’ and ‘Switzerland of the East’. Its breath-taking scenic beauty makes it a tourist’s paradise.

Manipur has the advantage of acting as India's 'Gateway to the East' through Moreh town, which is the only feasible land route for trade between India and Myanmar and other Southeast Asian countries. With about 3,268 square kms of area covered by bamboo forests, Manipur is one of India’s largest bamboo producing states and a major contributor to the country’s bamboo industry. In 2017, the state accounted for 10,687 square kms of bamboo bearing area.

Total merchandise exports from Manipur stood at US$ 0.95 million in FY21. In FY21, medical and scientific instruments accounted for a majority (55%) of the merchandise exports of the state. As of February 2021, Manipur had a total installed power generation capacity of 261.82 MW.

Imphal, Manipur’s capital city, has one airport and Air India provides air cargo services to this airport. Eleven national highways with a total length of 1,750 kms run through the state. Indian Railways is constructing the world's highest pier bridge across the river Ijai in Manipur. The construction of the Manipur Pier Bridge is worth Rs. 2.8 billion (US$ 38 million) and is scheduled for completion in March 2022.

According to the Department for Promotion of Industry and Internal Trade (DPIIT), FDI inflows to the northeast states1 totalled US$ 142 million between April 2000 and March 2021.

Some of the major initiatives taken by the Government to promote Manipur as an investment destination are: