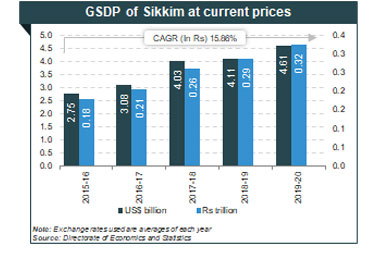 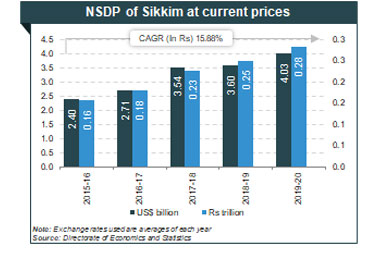 Sikkim is one of the fastest growing states in India. The state has favourable agro-climatic conditions, which support agriculture, horticulture, and forestry. Sikkim got certified as first fully organic state in India by the Central Ministry of Agriculture and Farmers’ Welfare as well as other recognized agencies of the country. It is home to around 5,000 species of flowering plants, 515 rare orchids, 60 primula species and 36 rhododendron species. This makes it one of the leading states in the northeast in terms of production and supply of cut flowers to mainland consumer markets. The state is also considered as a huge cardamom epicentre of the world, producing around 80% of large cardamom in the country.  According to Global Childhood Report 2019, Sikkim was the best state under Protective Contexts.

According to Department for Promotion of Industry and Internal Trade (DPIIT), Foreign Direct Investment (FDI) inflow in Sikkim (Including West Bengal and Andaman & Nicobar Islands) totalled
US$ 6.35 billion between April 2000 and September 2020.

Total merchandise exports from Sikkim stood at US$ 9.88 billion in FY20 and US$ 9.36 billion in FY21.  Drug formulations, biologicals, medical and scientific instruments, cereal preparations and miscellaneous processed items accounted for a majority share in the overall exports from the state. In FY21, total exports of drug formulation products from Sikkim stood at US$ 4.56 million (~49%).

Some of the major initiatives taken by the Government to promote Sikkim as an investment destination are: