Dairy Industry in India
The dairy industry in India is the largest globally, accounting for 23% of global milk production. The industry contributes 5% to the national economy and directly supports more than 8 crore farmers. India’s dairy industry has grown significantly over the past 10 years, supported by various initiatives taken by the government. The nation's milk production increased at a CAGR of 6.2% from 146.31 million tonnes (MT) in 2014-15 to 209.96 MT in 2020-21.

History of Dairy Industry in India
During the 1950s and 1960s, India had a milk shortage and was dependent on imports; annual production growth was negative for several years. Throughout the first decade after independence, milk production recorded a CAGR of 1.64%, which fell to 1.15% during the 1960s. 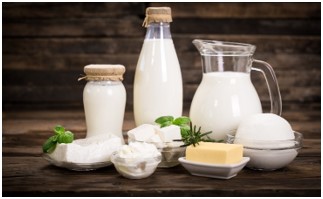 Despite having the world’s biggest cattle population, the nation generated less than 21 MT of milk annually. The National Dairy Development Board (NDDB) was established in 1965 to assist the Operation Flood programme, which was to be executed in stages, in establishing the Anand Pattern of dairy cooperatives throughout the country. The inaugural chairman of NDDB was Dr. Verghese Kurien, who is well-known in India as the Father of the White Revolution. Dr. Kurien and his team started working on the project’s launch, which called for establishing Anand Pattern cooperatives in milk sheds throughout the nation, from which liquid milk produced and purchased by milk cooperatives would be carried to cities.

Operation Flood was implemented in the following phases:

Through the National Milk Grid, Operation Flood made it possible for consumers in 700 towns and cities to access high-quality milk. The scheme also assisted in eliminating intermediaries, which decreased seasonal price differences. Due to the cooperative framework, it was financially feasible for farmers to produce and distribute milk and milk products on their own. Additionally, it eliminated India’s reliance on imported milk solids. In 1950-51, only 17 MT milk was produced. Before Operation Flood began, milk output was only 21.2 MT in 1968-69 but increased to 30.4 MT by 1979-1980, 51.4 MT by 1989-1990 and 209.96 MT by 2020-21. Daily milk consumption in India increased in three decades-the 1980s, 1990s and 2000s-from a low of 107 grams per person in 1970 to 427 grams per person in 2020-21.

Government Initiatives to Boost Dairy Industry
The government has taken several initiatives for development of the dairy industry in India. Few initiatives undertaken by the government to further boost the opportunities in the dairy sector in India are as follows:

Rashtriya Gokul Mission
To enhance milk output and productivity, which will increase farmers’ income from dairying, the Rashtriya Gokul Mission (which aims to genetically improve the cattle population and promote and conserve indigenous cattle breeds) has been given a five-year extension for implementation. Under the mission, farmers now have access to several cutting-edge technologies at their doorstep, including sex-sorted semen, IVF technique and genomic selection. Milk production will rise from 198.4 million metric tonnes in 2019-20 to 300 million metric tonnes in 2024-25 with the implementation of the planned programme. An increase in milk production of an average of 1,200 kg per animal per year will directly assist eight crore dairy producers.

National Programme for Dairy Development (NPDD)
NPDD has been in place since February 2014 and aims to build or strengthen infrastructure for the production of high-quality milk as well as for the procurement, processing, and marketing of milk and milk products through the State Implementing Agency or State Cooperative Dairy Federation. In July 2021, the programme underwent restructuring/realignment. From 2021-22 to 2025-26, the redesigned NPDD scheme will be implemented with a budget of Rs. 1,790 crores (US$ 217.3mn). The programme’s objectives include enhancing the quality of milk and milk-derived products and growing the organised market share for procurement, processing, value addition and marketing.

Dairy Entrepreneurship Development Scheme (DEDS)
DEDS is being implemented by the Department of Animal Husbandry, Dairying, and Fisheries to create self-employment opportunities in the dairy industry. It covers activities such as improving milk production, procurement, preservation, transportation, processing and marketing by offering back-ended capital subsidies for bankable projects. The National Bank for Agriculture and Rural Development is carrying out the programme.

Exports of Dairy Products
India’s export of dairy products has witnessed a steady rise over the last three years. In 2021-22, India exported 108,711 MT of dairy products to the world for a total of Rs. 2,928.79 crore (US$ 391.59 million), with key export destinations being Bangladesh, UAE, Bahrain, Malaysia, Saudi Arabia and Qatar.

Conclusion
Following Operation Flood, many rural households in India turned to the dairy and animal husbandry industries as their main source of income. For about 25 years, India has been the largest milk-producing nation in the world. It has produced twice as much milk in the last 20 years. The dairy industry has greatly aided the expansion of India’s rural economy. The National Dairy Plan (a framework for the industry centred on sustainable growth) as well as general empowerment programmes, such as the Jan Dhan Yojana and the Start-up India initiative, were among the government’s measures that helped infrastructure for dairy farming. Under Prime Minister Modi’s Atmanirbhar Bharat agenda, the animal husbandry and dairying sectors have seen significant growth over the last eight years, and their progress is an impressive illustration of independence.