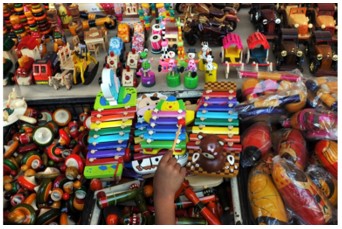 The Indian toy industry manufactures a wide variety of toys which can be broadly classified into two categories based on their application and purpose – educational and recreational. Educational toys include toys and games made from plastics and cardboard. On the other hand, recreational toys mainly include electronic (remotely control-based, video games), battery-operated, plastic, soft and mechanical pull-back toys. Of these, battery-operated and electronic toys, and video games are only imported and not manufactured locally. All other types of toys are manufactured in India as well as imported.

Toy Exports Market Opportunity
Globally, the main factors boosting the demand for toys include the growing young population, changing spending habits with rising disposable income and shifting trend from traditional toys to electronic toys, powered by innovative technologies. The global toy trade was valued at US$ 93 billion in 2020. The Indian toy industry, with a share of just 0.2% in global toy exports, has significant potential to grow. Toy exports from India increased from US$ 72.5 million in 2016–17 to US$ 177.0 million in 2021–22. Tricycles, scooters, pedal cars and similar wheeled toys, dolls’ carriages, puzzles of all kinds, and recreational toys are among the key toy categories exported from India. The consistent growth in Indian toy exports could be attributed to initiatives such as Make in India and Vocal for Local under the Atmanirbhar Bharat scheme aimed to create a competitive environment for toy manufacturers in India and promote Indian toys globally. India has the potential to become a major export hub for electronic toys, including science, technology, engineering, and math (STEM) toys and video game consoles, which are in high demand in the global toys and games market.

India exports sports goods and toys to about 129 countries across the globe. India’s major toy export destinations include the USA, the UK, Germany, Mexico, and the Netherlands. In India, among states, Maharashtra leads the Indian toy and game exports; the exports grew to US$ 76.3 million in 2019–20 from US$ 32.9 million in 2017–18. Uttar Pradesh and Karnataka are other key states, with toy and games exports valued at US$ 49.4 million and US$ 36.4 million, respectively. In 2021–22, the US was the largest importer of Indian toys, valued at US$ 69.3 million, accounting for 39% of the total exports from the country. The other key toy export destinations include the UK and Germany, with a share of 10% and 6%, respectively. The share of the top 10 countries importing Indian toys and games increased to 74% at a CAGR of 13% between 2020 and 2016. It implies the importance of traditional markets in the growth in exports and continued demand momentum for Indian products. Among the various emerging markets, the UAE holds strong growth potential for Indian toy exports, as the country leads in terms of demand for children’s toys in the Middle East region. India can capture the lion’s share in the UAE market by taking advantage of the large Indian population residing in the country.

Government Initiatives
The Government of India has adopted a strategy to promote toy exports at the district level. Under the guidance of the Ministry of Commerce, the Director General of Foreign Trade (DGFT), actively engages with the state governments to execute the district-level initiatives in a phased manner. Accordingly, the state governments are embracing global toy manufacturers to set up toy manufacturing units in their respective toy clusters. Recently, the Uttar Pradesh government approved 100 acres of land in Greater Noida for setting up a toy manufacturing hub. Similarly, the Karnataka government authorised 400 acres of SEZ land to set up the country’s first toy manufacturing cluster in Koppal. The Government of India is encouraging start-ups and entrepreneurs to boost manufacturing to meet the growing domestic demand, minimise imports and increase India’s share in global toy exports.

Scheme of Fund for Regeneration of Traditional Industries (SFURTI)
The primary objective of this scheme is to organise the traditional toy industries and artisans into clusters to make them competitive by enhancing the product marketability of such clusters and provide support to generate sustainable employment. It includes a range of initiatives focusing on providing traditional artisans of associated clusters with training on innovative skills; making provisions for common facilities equipped with enhanced tools for artisans; developing cluster governance systems with the active participation of stakeholders; and developing advanced processes, market intelligence and new models of public-private partnerships.

Product-Specific Industrial Cluster Development Programme
The Product-Specific Industrial Cluster Development Programme aims to build toy clusters in dedicated SEZs to create self-sustained ecosystems catering to export markets. This programme aims to attract investments and boost India’s export capacity. The Government of India has approved an outlay of Rs. 2,300 crores (US$ 307 million) to set up eight toy manufacturing clusters, three in Madhya Pradesh, two in Rajasthan, and one each in Karnataka, Uttar Pradesh, and Tamil Nadu.

The government has implemented several other initiatives as well. Moreover, the government has been promoting the toy industry by organising events such as the Virtual India Toy Fair 2021 and Toycathon-2021. These events help young artists to conceptualise novel toys based on Indian history, civilisation, mythology, and culture.

The Road Ahead
Since the Honourable Prime Minister of India, Mr. Narendra Modi, emphasised the growing global imprint of Indian toys, multiple states across the country have come forward to foster toy manufacturing ecosystems aimed at increasing import substitution. The Government of India has taken various initiatives to ensure that no sub-standard and unsafe cheap toys are imported. The initiatives include introducing mandatory sample testing of imported shipment of toys, implementing the Toys Quality Control Order (effective 01 January 2021) and enhancing the basic customs duty from 20% to 60% for toys. Implementation of the National Toy Action Plan to support the development of toy manufacturing clusters is expected to drive toy exports from India.

Factors such as the expansion of the local manufacturing base, promotion of Indian toys with high quality and maintenance of affordability of these quality products would drive growth in Indian toy exports. The industry can enable these growth drivers by incentivising global and domestic players to build end-to-end, integrated manufacturing facilities. With the support of the government, the toy manufacturing industry is addressing issues such as cheap raw material availability and lack of skilled labour through increased research and development focus and technology integration. Such efforts should improve India’s competitive edge and boost its share in the global toy export market.